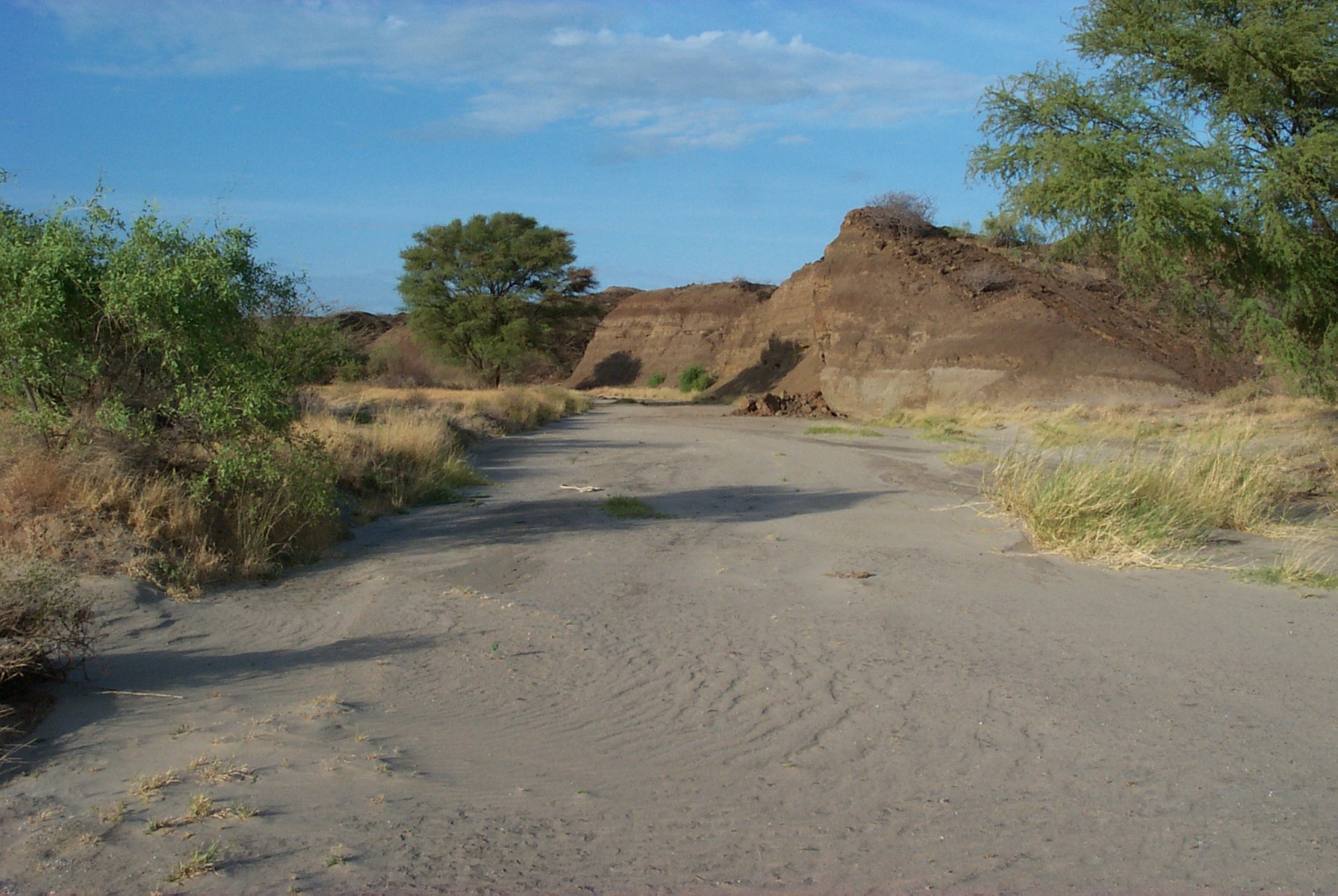 My lab is built around the premise that patterns and processes of evolution, change over time in the broadest sense, can only be understood in context. We provide context for evolutionary scenarios ranging from the development of the East African Rift System, to the modern savanna community, from hominin evolution to the cultural development that leads to modern civilization, and for climatic change through the modern and ancient worlds. The long-term focus of much of this research has been geographic, centered on the unparalleled opportunities to understand the context of evolution in the Turkana Basin of Kenya and Ethiopia. 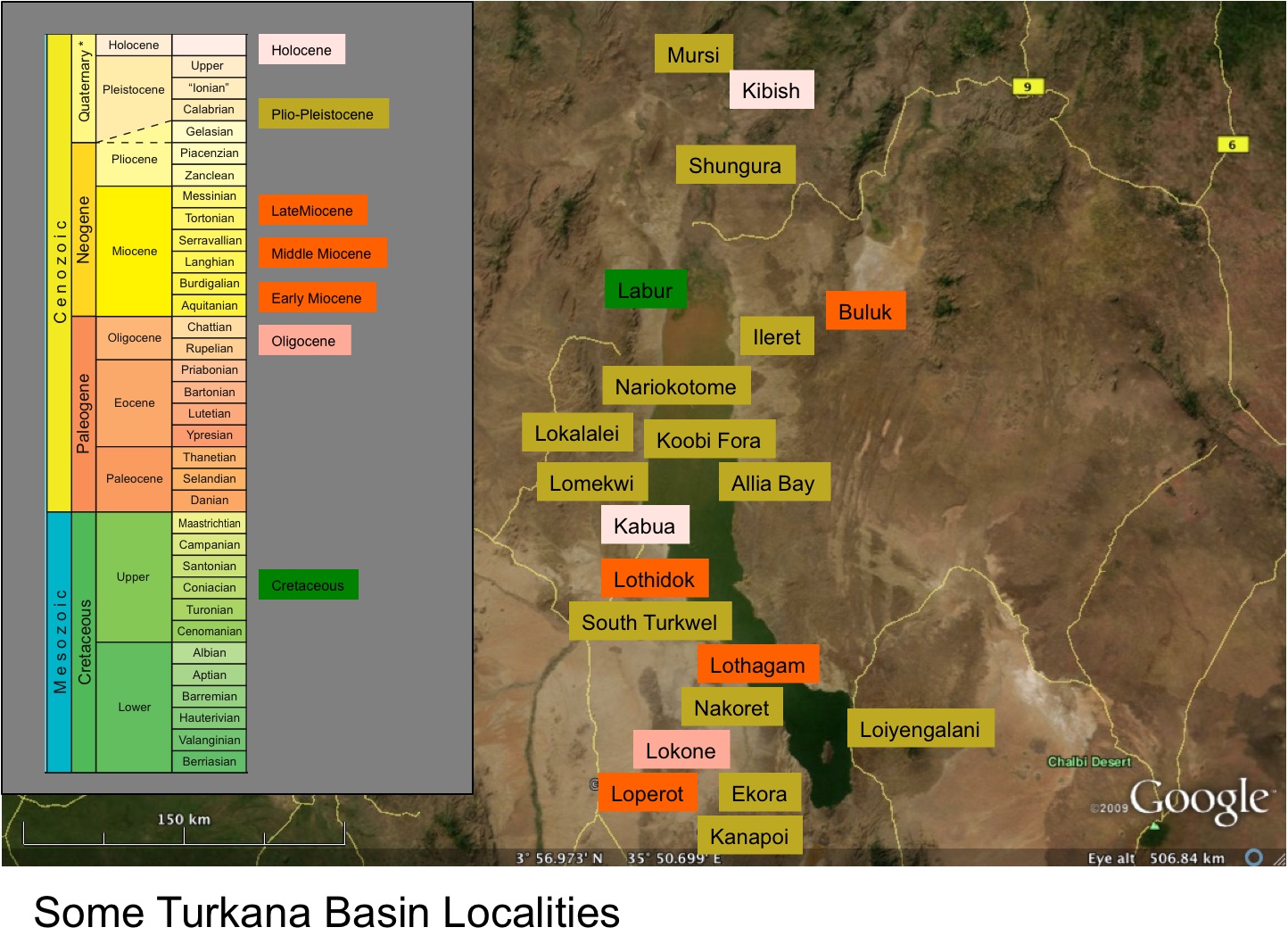 Geological Evolution of the Turkana Basin

Investigations into the geological history of the Turkana Basin have been the backbone of studies providing context for the world-famous fossils and archaeological assemblages recovered there over many decades.  A recent review of our current state of understanding the basin can be found here.  We are involved in several on-going projects working to further elucidate various aspects of basin evolution.

Our component of the Hominin Sites and Paleolakes Drilling Project (HSPDP) involves a coring effort near Nariokotome on the west side of Lake Turkana. The overall plan, developed through more than a decade of workshops, proposals, and field investigations, will link a series of coring efforts from the Afar in Ethiopia to the Magadi Basin of Kenya, and spanning some four million years of Earth history.  The West Turkana coring recovered over 200 m of lacustrine clays from an interval of basin history known as the Lorenyang Lake. 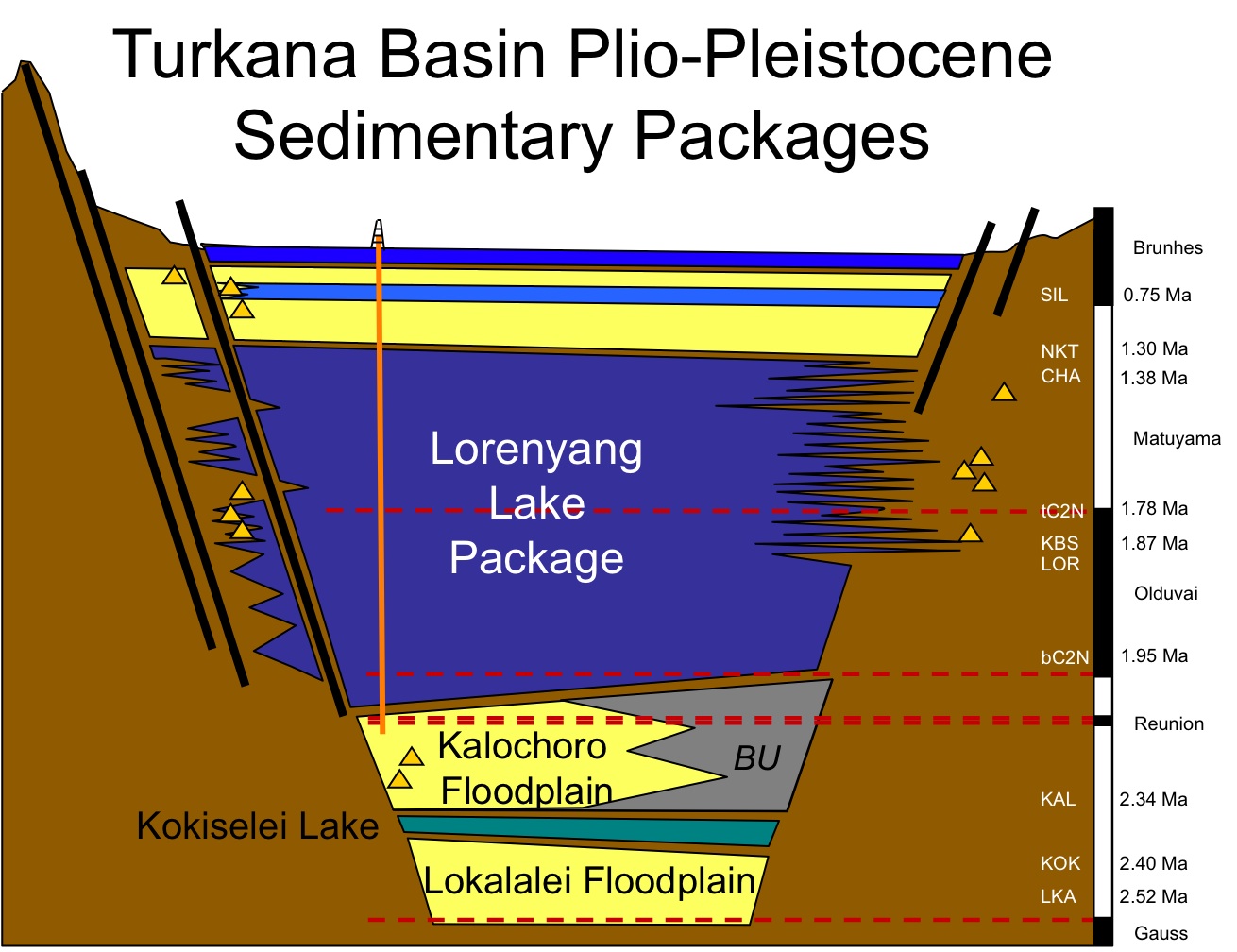 Drilling in West Turkana took place between 23 June and 11 July 2013.  We recovered some 216 meters of core during the drilling operation, which included nighttime work. 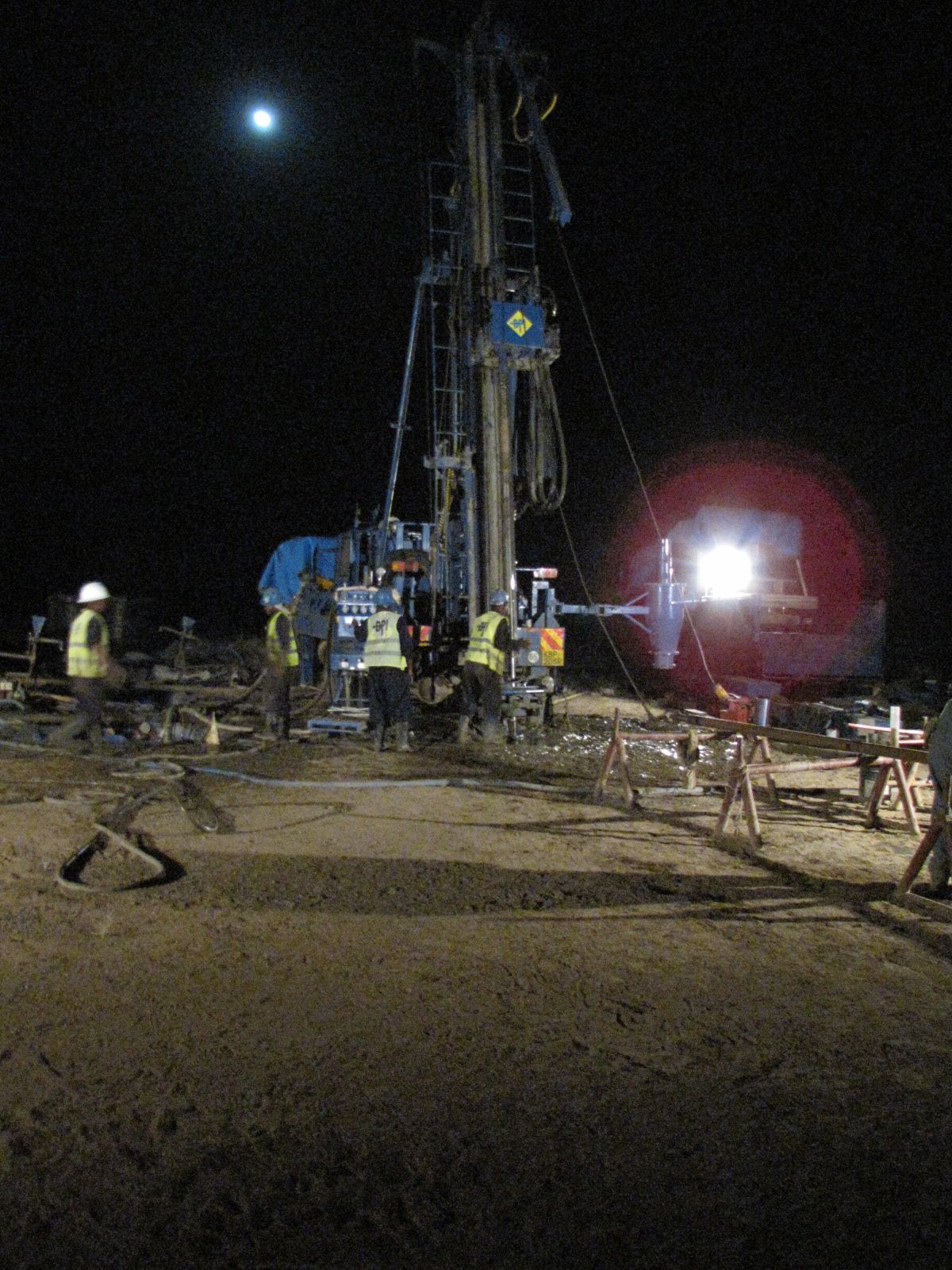 Initial Core Description (ICD) took place in mid-November.  We were able to split, image and describe all of the core over a ten-day period. 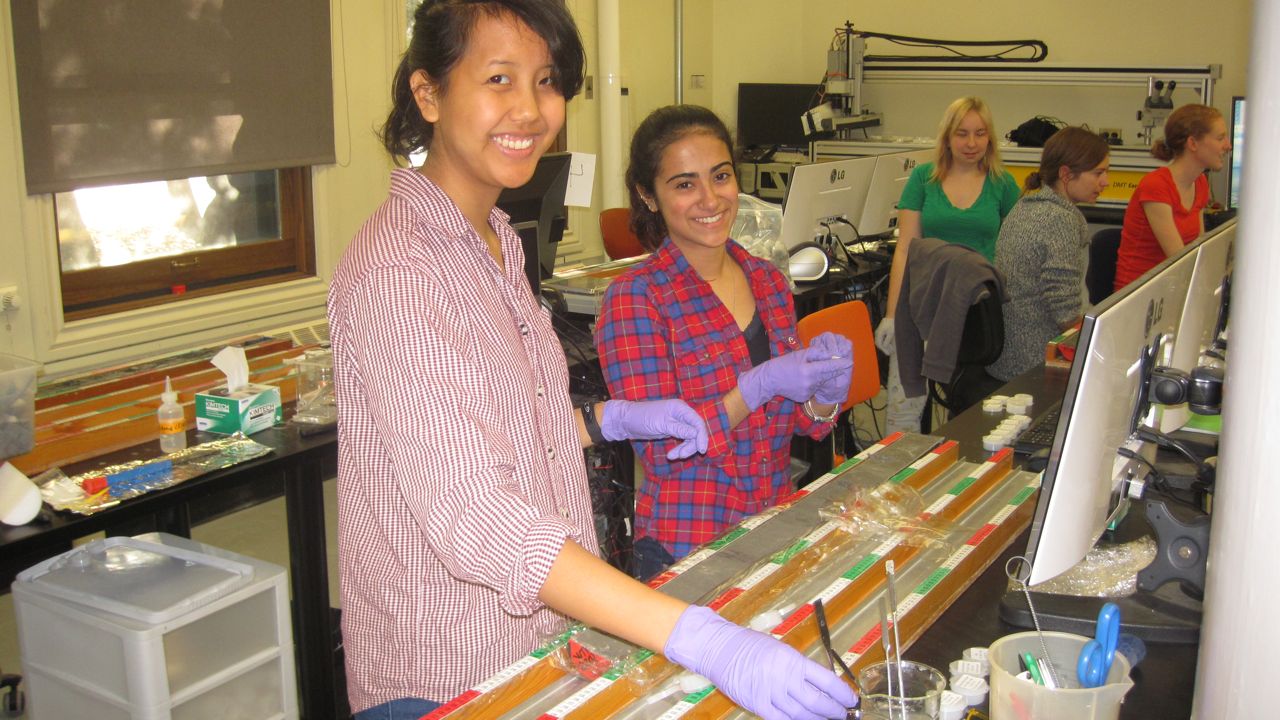 A nice summary of the HSPDP was published by Ann Gibbons in the 2 August 2013 issue of Science.  Updates on drilling related topics are posted regularly on the project website.

Working with colleagues from The Netherlands, France and Germany, we have been developing a high-resolution approach integrating detailed lithostratigraphic records with magnetostratigraphy and Sr isotopic records to better understand the relationship of precessional-scale climatic variability to hominin evolution.  With generous support from the Leakey Foundation and other sources, three field campaigns have recovered an impressive record of environmental variability from lacustrine facies at Koobi Fora and West Turkana.  The first report of the novel Sr isotope proxy we employed was published by Jose Joordens and colleagues in the journal Earth and Planetary Science Letters in 2011 (link).  Our second contribution was published in 2013 in the Journal of Human Evolution (link).
Fieldwork in West Turkana during the summer of 2013 resulted in several new high-resolution sections.  Again, we targeted the Lorenyang Lake interval (ca. 2.1 - 1.4 Ma), this time along the Kaitio, Kalochoro, Nanyangakipi, and Kangaki lagas.  This season, the paleomag team included Guillaume Dupont-Nivet, Mark Sier and Cor Langereis.  The lithostratigraphy and sediment sampling were shared by Jose Joordens (PI), Jeroen van der Lubbe, Cat Beck, and Craig Feibel.  One of the key advances of this season was completion of a detailed outcrop investigation of the Kaitio section, which provides a companion record to the WTK13 core recovered by the HSPDP.  Initial comparisons between the outcrop and core records were presented at the 2014 Northeastern Section Geological Society of America Meeting in Lancaster, PA (30 MB ppt). 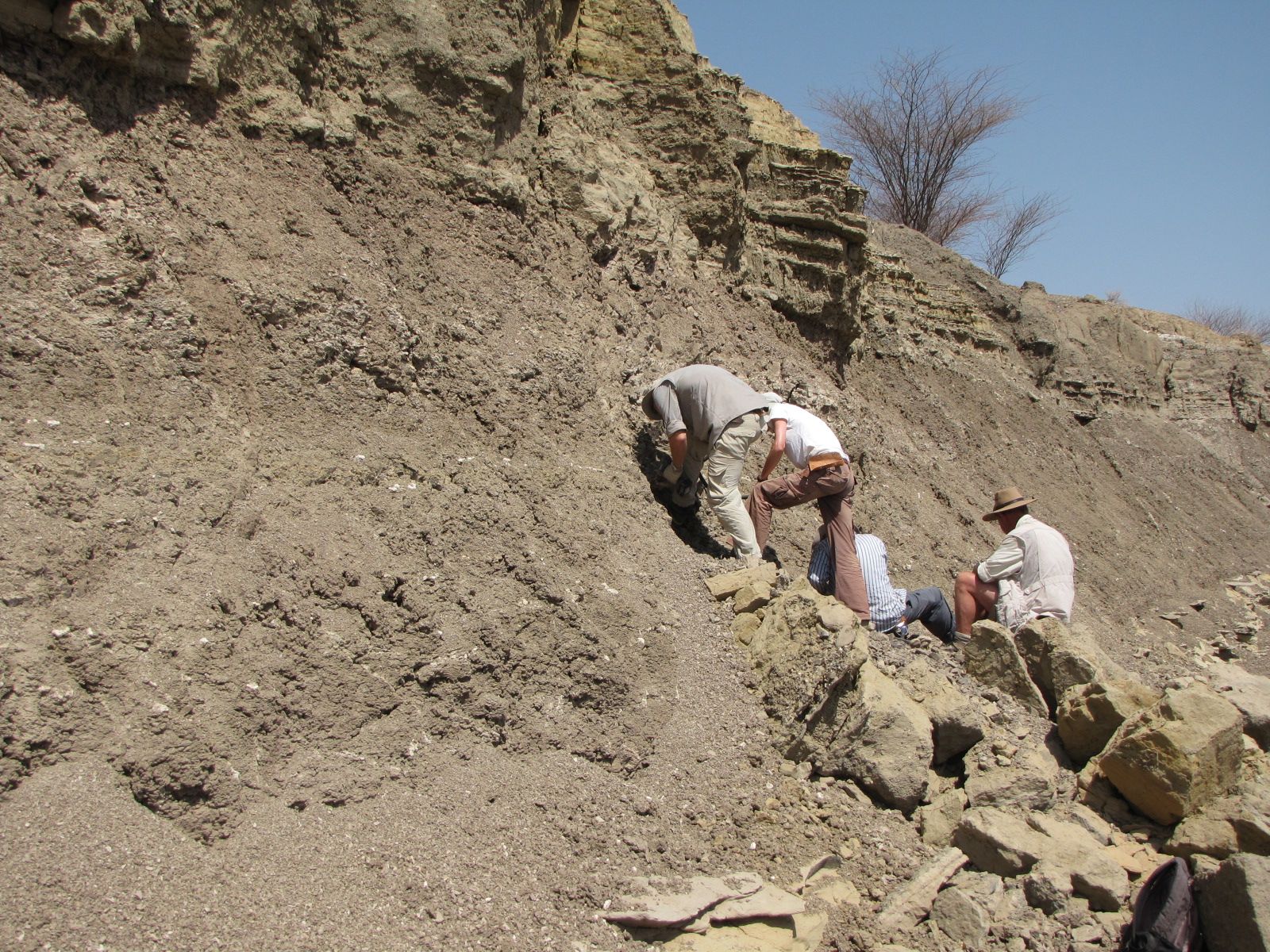 In the early investigations of stratigraphy around the KBS site in Area 105 of the Koobi Fora region, Ian Findlater recognized evidence for major cut-and-fill cycles.  Initially it was thought that these represented a single "Post-KBS Erosion Surface" marking major erosion after deposition of the KBS Tuff.  Subsequent work has demonstrated that there are many surfaces that vary in the magnitude of incision and thickness of fill, and that they occur both before and afer the KBS eruption.  They are now interpreted to reflect response of the level of the Lorenyang Lake to precession-driven monsoonal variation.  As such, they have the potential for refined temporal control on depositional sequences, at millenial scales. 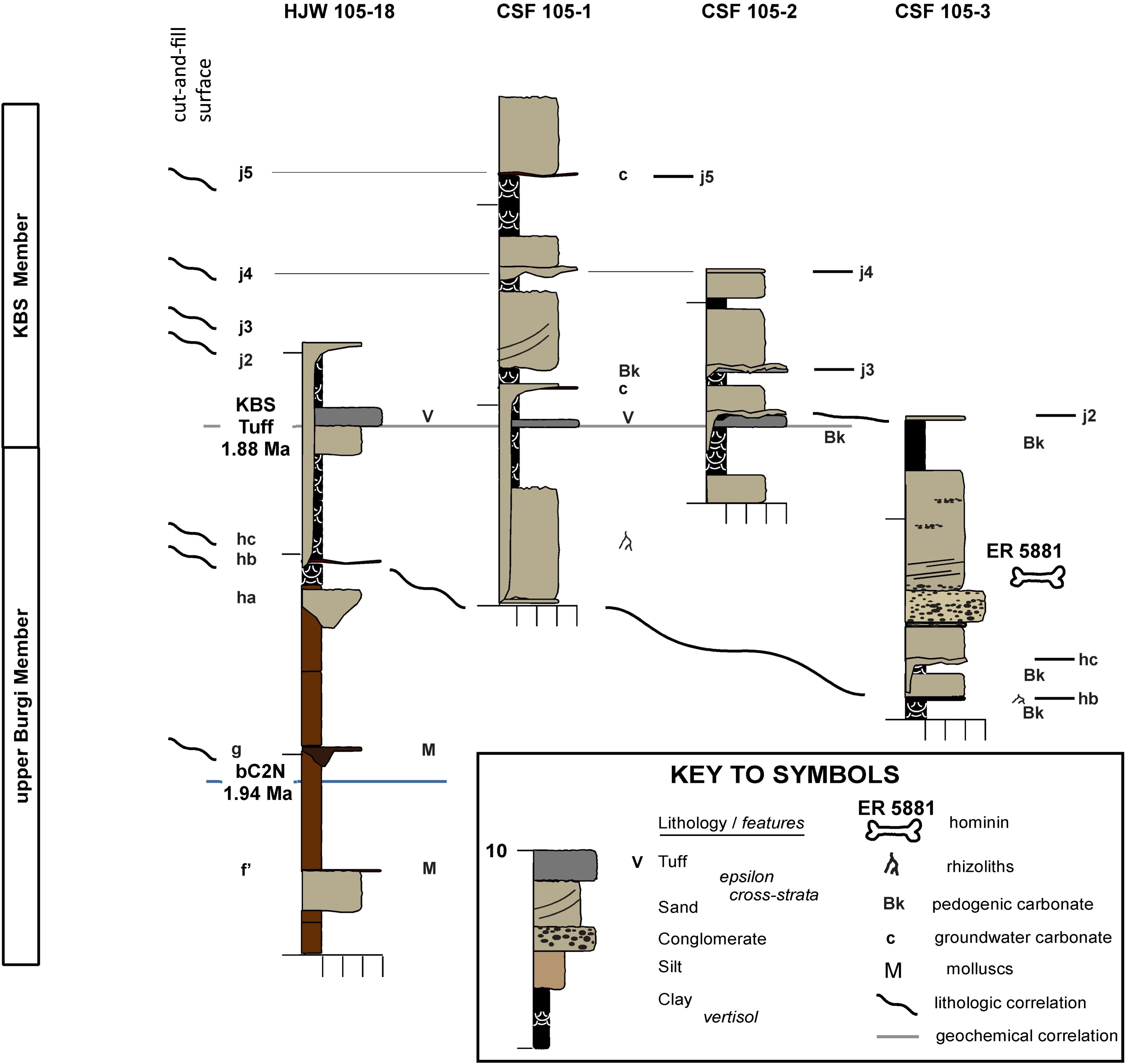 Visualizing the changing landscapes of the Turkana Basin over the past four million years is important as a frame of reference for environmental context, and also serves as a useful tool for exploring the spatial component of environmental variables in the past.  In early attempts undertaken with Frank Brown, I utilized a cartoon-like simplification of major landscape elements in order to convey first-order landscape shifts from lake to river and back.  More recently, working with Rutgers undergraduate Patricia Schwindinger, I've followed the Ron Blakey approach of modeling ancient landscapes in more realistic images.  A selection of these reconstructions are highlighted on the National Geographic Society's Bones of Turkana educational site in Paleogeography of Lake Turkana.

Patricia Schwindinger's reconstruction of the Lorenyang Lake, which dominated the basin 1.95 million years ago.  The outline of modern Lake Turkana included for reference.

Research is continuing at the locality of Kanapoi, with its unparalleled record of Australopithecus anamensis fossils and habitats. Current work at Kanapoi focuses on the circumstances of accumulation, burial, and preservation of the Au. anamensis specimens. At the type locality, hominins occur in association with other macrovertebrates and a rich microfaunal assemblage deriving largely from a distinctive paleosol that Jonathan Wynn termed the Dite pedotype.   Sedimentary facies analysis of the Kanapoi sediments currently underway will help to determine whether it is the nature of the soil, burial by volcanic ash, or some other factors that resulted in this important fossil assemblage. 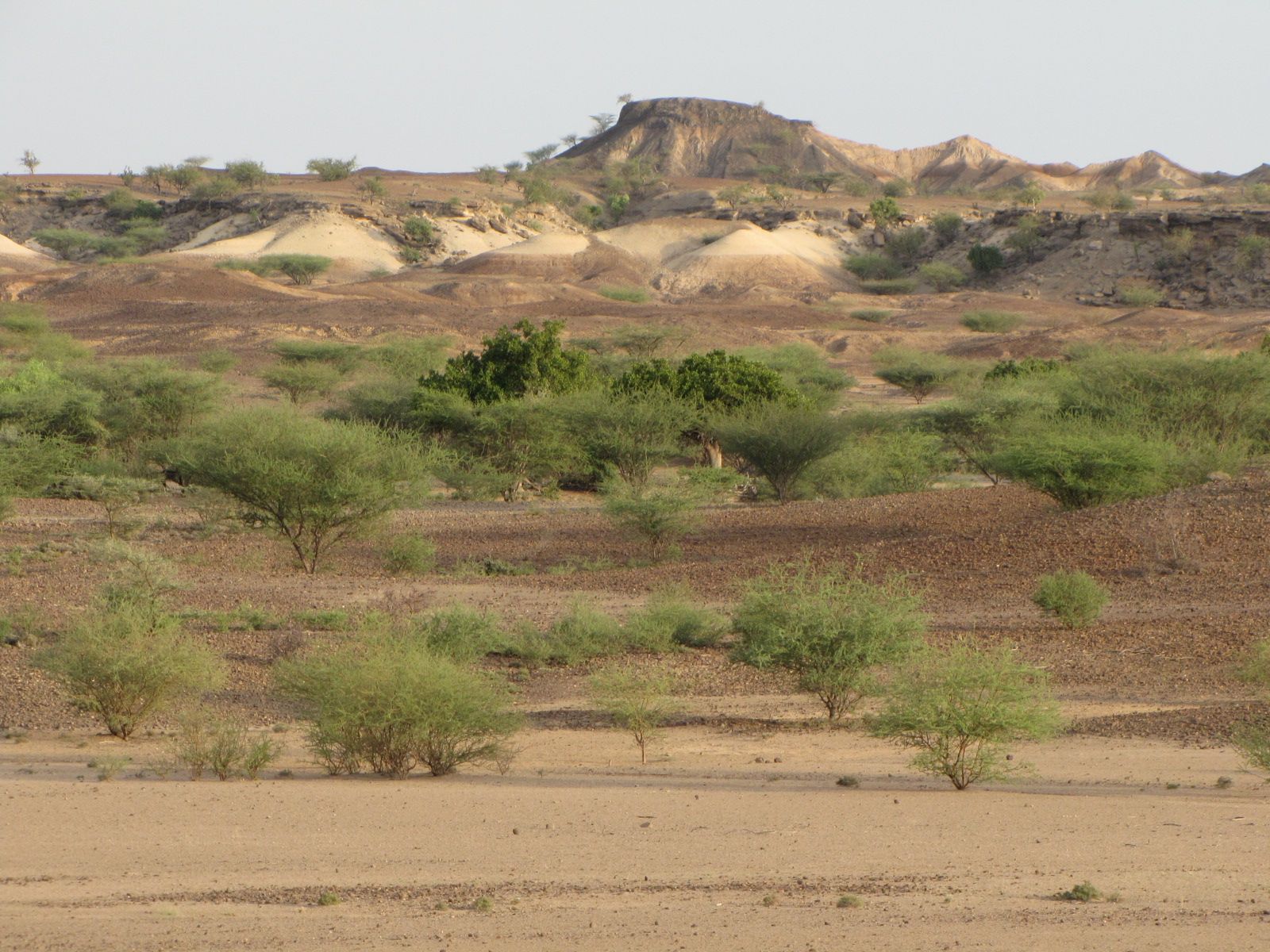 The central area of Kanapoi is shown above, with the pale Kanapoi Tuff and capping Kalokwanya basalt.  The tuff has been dated by Ian McDougall to 4.11 Ma.

In 2014, Melissa Boyd joined the Kanapoi investigations, gathering field data for her Honors Thesis on the circumstances of accumulation, burial, and preservation of the rich Australopithecus anamensis assemblage.  Two distinct settings preserve these fossils, a deltaic channel setting, which yielded additional fossils this year, and the floodplain paleosols typical of the type locality.  Detailed sedimentary logging, sampling and mapping conducted in 2014 have greatly bolstered the record of depositional environments at these localities. 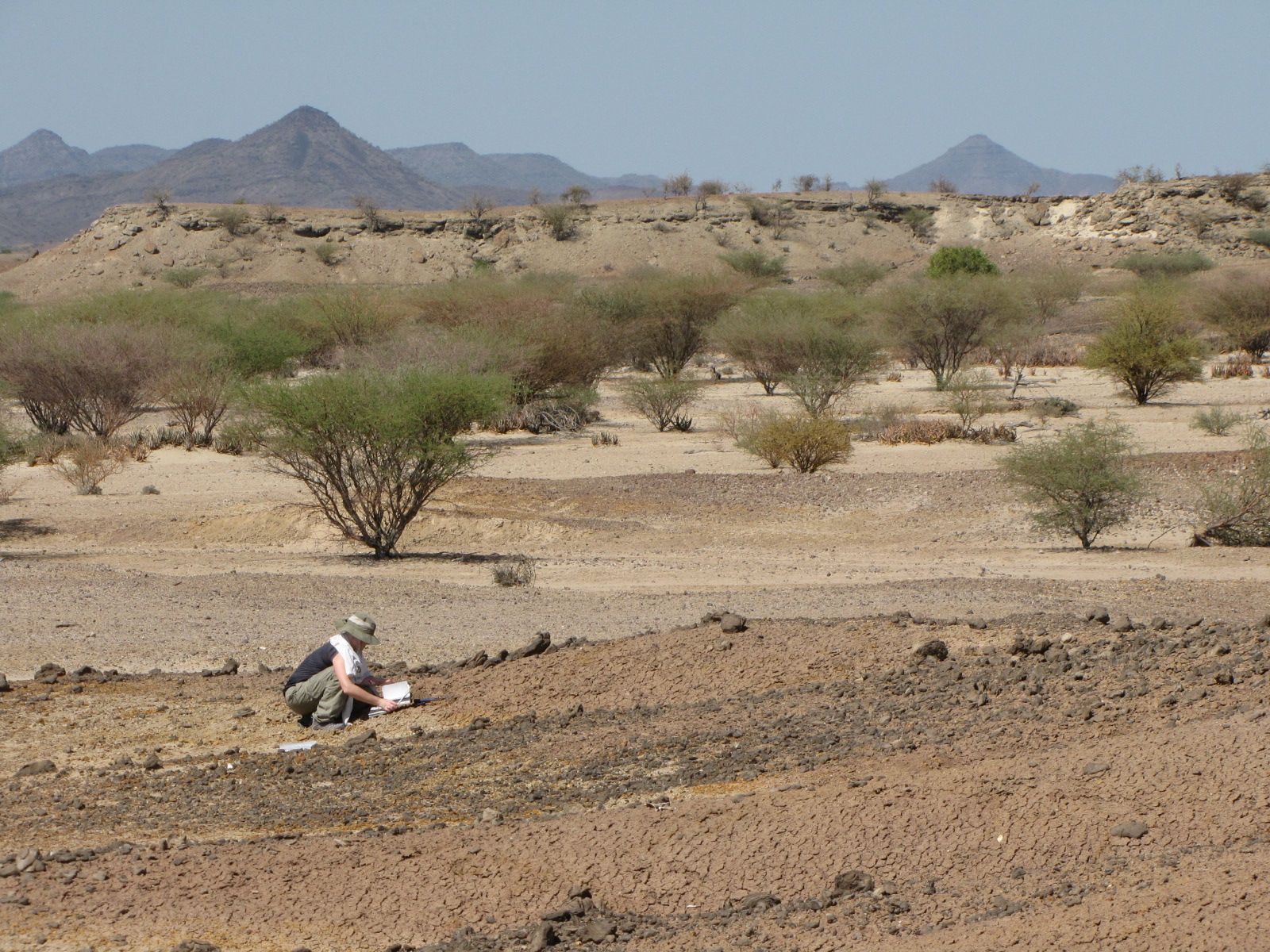 Among the most spectacular localities in the Turkana Basin is Lothagam, with its Late Miocene sequence.  Investigated by a variety of research teams from the 1960s through the 1990s, Lothagam is still of tremendous interest as a rich fossil locality documenting the origins of the African savanna community. 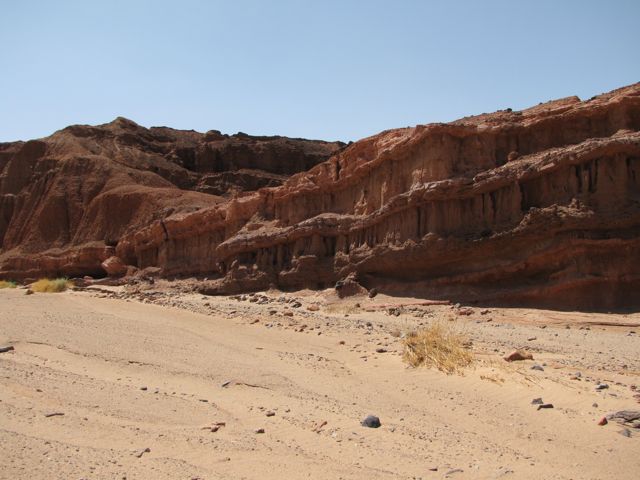 The fossil assemblage from Lothagam is tightly constrained by Ar-Ar geochronology thanks to Ian McDougall, utilizing altered tephra beds such as the Lower Markers pictured above.  Conveniently close to the TBI Turkwel campus, Lothagam has become the capstone field experience for my course Geology of the Turkana Basin.  A recent TBI blog from the excursion can be found here.
The results of more than forty-five years of geological research at Lothagam are undergoing a transformation as part of an integrated Geoinformatics Project, led by Bob Raynolds of the Denver Museum.  This project is assemblig spatial, stratigraphic, temporal and fossil data in and integrated database with a user-friendly access via Google Earth.  A working model of the Lothagam dataset was field tested in February of 2014.