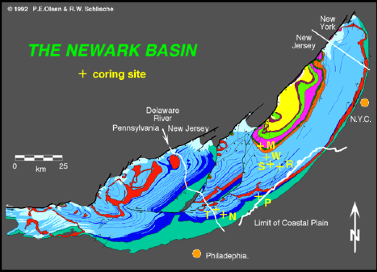 The Newark Basin Coring Project (NBCP) was funded by the National Science Foundation from 1989 to 1994.  The three main goals of the project:

A primary objective of the Newark Basin Coring Project (NBCP) was to document the record of astronomically driven climate cycles preserved in 200 to 230 million-year-old lake sediments by drilling a series of core holes in the Newark rift basin of New York, New Jersey, and Pennsylvania (Olsen and Kent, 1990).  A total of 6770 m of continuous core was collected at seven sites in the central part of the basin in New Jersey using an offset drilling method using two different drilling systems.  The cores recovered a record of 30 m.y. of cyclical climate change in strata that formed in a tropical continental setting of the ice-free world of Late Triassic Pangea.  These cores provide the longest available continuous record of astronomically driven climate cycles in a continental setting.  Other major goals of the NBCP were the construction of a high resolution, astronomically calibrated, magnetic polarity time scale for the Late Triassic, and the production of a detailed record of the evolution of a continental rift basin.

Some of the specific accomplishments of the NBCP include:

1) a complete lithostratigraphic description of the Newark basin section showing a hierarchy of sedimentary cycles demonstrated to be of Milankovitch climate cycle origin (Olsen et al., 1996);

2) quantitative documentation of a wide spectrum of astronomical cyclicity based on lake-level variations forced by eccentricity-modulated precession changes (Olsen and Kent, 1996, 1999);

6) development of a spatio-temporal framework, based on paleolatitudes and the geomagnetic polarity time scale from the NBCP cores, for analysis of climate zonation on a drifting supercontinent (Kent and Olsen, 2000; Olsen and Kent, 2000; Kent and Tauxe, 2005); 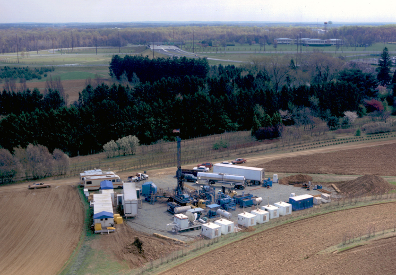 The Army Corps of Engineers (ACE) Passaic River Diversionary Tunnel Project Cores cover the Jurassic sections.  The ACE cores are short to moderate-length cores recovered along the proposed path of the Passaic River diversionary tunnel.  The close spacing of the cores in the Jurassic formations allows construction of a composite stratigraphic section, which complements the NBCP composite section (Geology of the Newark rift basin).

The ACE cores extend the NBCP record in the Newark basin through the entire igneous extrusive zone , which is now recognized as part of the vast Central Atlantic Magmatic Province (Marzoli et al., 2004) and provides essential material for isotopic dating (e.g., Hames et al., 2000).  Cycle stratigraphic analysis of the interbedded sediments in the ACE cores shows that all the lavas were erupted within a time interval of ~580 k.y. (Olsen et al., 1996).  Such a short duration is not inconsistent with but would not have been demanded by available high precision isotopic dates (Hames et al., 2000).

Left: Early Jurassic stratigraphy of the Newark basin based on numerous ACE cores (red) and the NBCP Martinsville core (purple).  Depth rank is a relative measure of lake depth from shallow (0) to deep (5).  Modified by Geology of the Newark rift basin from Olsen et al. (1996). 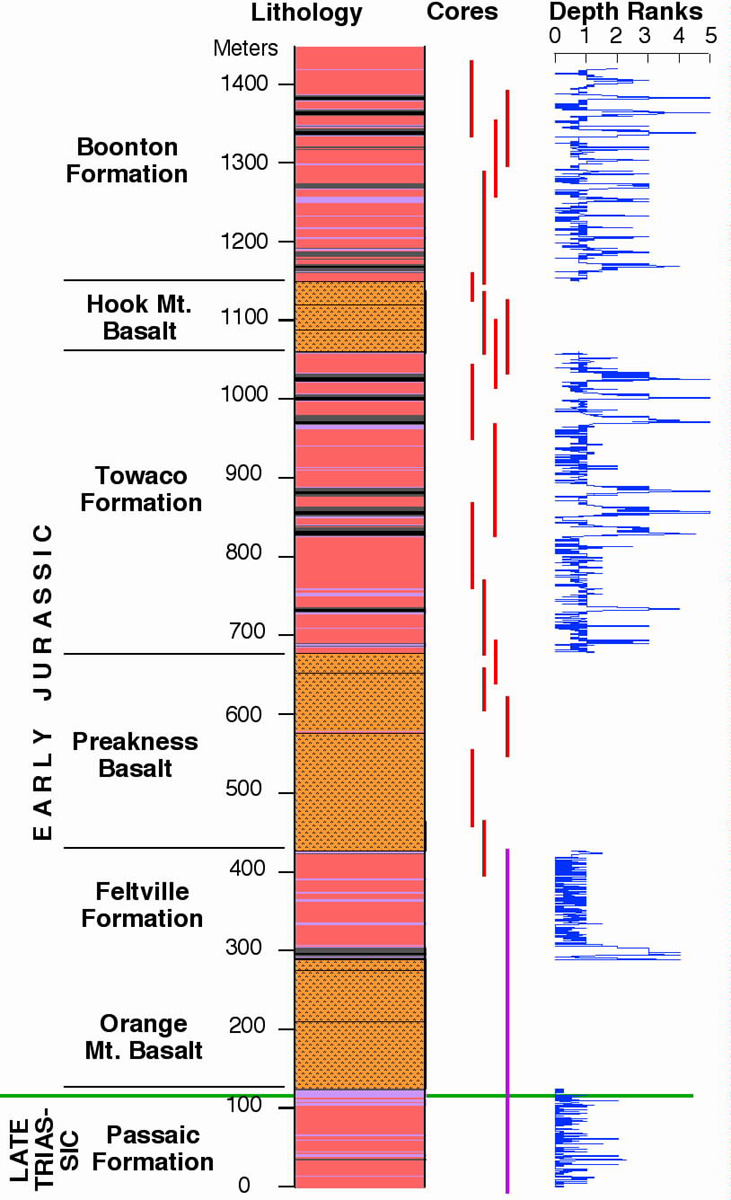