This past winter, Professor Juliane Gross participated in the annual Antarctic Search for Meteorites (ANSMET), which consisted of several weeks of fieldwork in frigid conditions. Upon her return, we conducted a Q&A with Dr. Gross about her meteorite hunting expedition!

(1) How did you initially become interested in the space sciences and, in particular, studying meteoritics?

I have always been interested in space sciences. When growing up I was particularly interested in the outdoors, learning about the stars and other planets, I was interested in how these things are connected and how it all works. And so, growing up, I wanted to become either a farmer or an astronaut. Instead, I became a planetary scientist working with extra-terrestrial samples. It makes me feel like I’m actually exploring other “worlds”. Holding a piece of another planet like Mars or a piece of an asteroid in your hands that is billions of years old is thrilling, it puts your own life and everything around you into perspective. It is humbling and exciting at the same time. I love it.

(2)  What motivated you to join in the Antarctic Search for Meteorites (ANSMET) program?

I was always curious about how we, as a community, find and obtain meteorites. And once I learned about the ANSMET program there was no holding back. I really wanted to help recover meteorites off the ice plateau in Antarctica and see them in their “natural habitat”. And Antarctica was the last continent that I hadn’t visited yet, so there was that too :-)

(3)  How are ANSMET team members selected?

ANSMET is one of the few Antarctic research projects that invites graduate students and senior researchers from other institutions to participate in the field work on a volunteer basis. Although some level of fitness and outdoor experience is helpful and very useful, much higher value is placed on active research with Antarctic meteorites, academic involvement with meteorites or other planetary materials, which includes university researchers or graduate students. The field party is always a mix of ANSMET veterans and newcomers (for safety), only a few new people are likely to be invited each season. I feel very humbled and grateful that I got to go this past season. 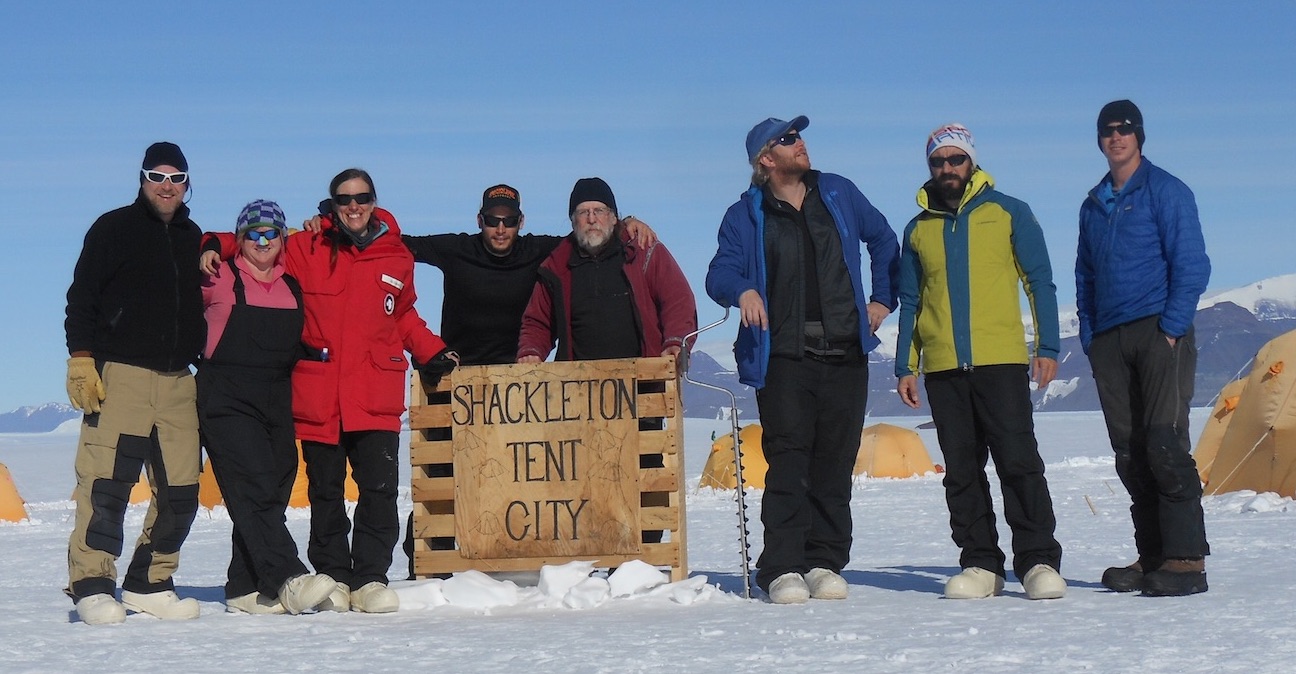 Professor Gross with the 2018 ANSMET team.

(4)  How grueling was your Antarctic experience?  What was your biggest challenge in the field?

I had the best time ever in Antarctica, it wasn’t grueling at all. I loved every second I was out there. We ate self-made vanilla ice cream made with Antarctic snow and drank tea made with Antarctic glacier ice that is thousands to millions of years old. We were a great team, we laughed so much together and comforted each other on bad days. In the deep field we have learned how to embrace the hardship and harshness of Antarctica and how to turn them into memorable moments of joy and fun that we will never ever forget again. Antarctica is this weird 2-sided medal. On the one hand it is the most beautiful place on Earth that I have ever see, with its sparkling snow, the vast ice fields that look like oceans frozen in eternity, the sun halos and snow sculptures created by the katabatic winds. It is truly magical. But at the same time Antarctica is trying to kill you every second you are out there. The biggest challenge that I faced were the extremely cold temperatures and keeping warm. My body was not producing at lot of body heat in the beginning and I started to lose too much weight too quickly simply by trying to stay warm even though we ate an enormous amount of food (around 6000 calories per day). That was a huge challenge for me until I started eating pure butter. After that my body started to produce more heat and I managed to stay comfortable for the most past. There were always parts of me cold but at least my core temperature was not dropping anymore. Despite the huge amount of calories that I ate each day I still lost 20 pounds by the end of the season. 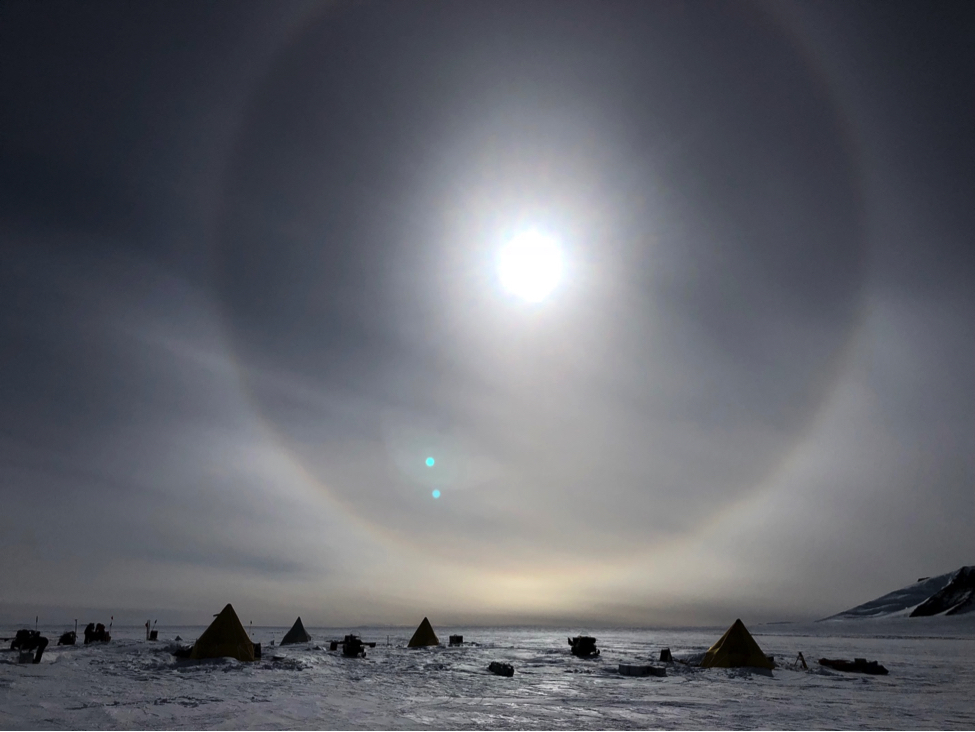 An ANSMET campsite with solar halo.

(5)  How many meteorites did the ANSMET team collect?

As a team we recovered 263 meteorites total. Some of the specimens are as big as the size of a rugby ball and others were as small as a marble. But we loved every single one of them.

(6)  Did you characterize any of the meteorites in the field or when you got back to civilization (McMurdo, New Zealand, etc.)?

True characterization and classification happens at NASA JSC in Houston and at the Smithsonian. We only do the basic field characterization, meaning describing what type of meteorite it is (e.g., achondrite vs chondrite; carbonaceous chondrites vs ordinary chondrites) and we do that in the deep field. As soon as we find a meteorite, before we recover and pack it, we measure the dimensions of the rocks, estimate the fusion crust coverage, and record how they were found, for example if they were recovered from the blue ice or found sitting in a moraine. Specific classification happens once the meteorites are carefully thawed at NASA JSC and the Smithsonian.

(7)  What was the coolest meteorite you found?

In my personal opinion the coolest meteorites we recovered where some of the achondrites. Knowing that they originated from some differentiated planetary body was amazing. But we also recovered iron meteorites which are quite uncommon to find in Antarctica, so I was also really excited about those too. To be honest I was excited about every meteorite we recovered. It is thrilling to find an extraterrestrial rock that you know you are the first person to lay eyes on, on the entire planet. It is an addicting feeling. 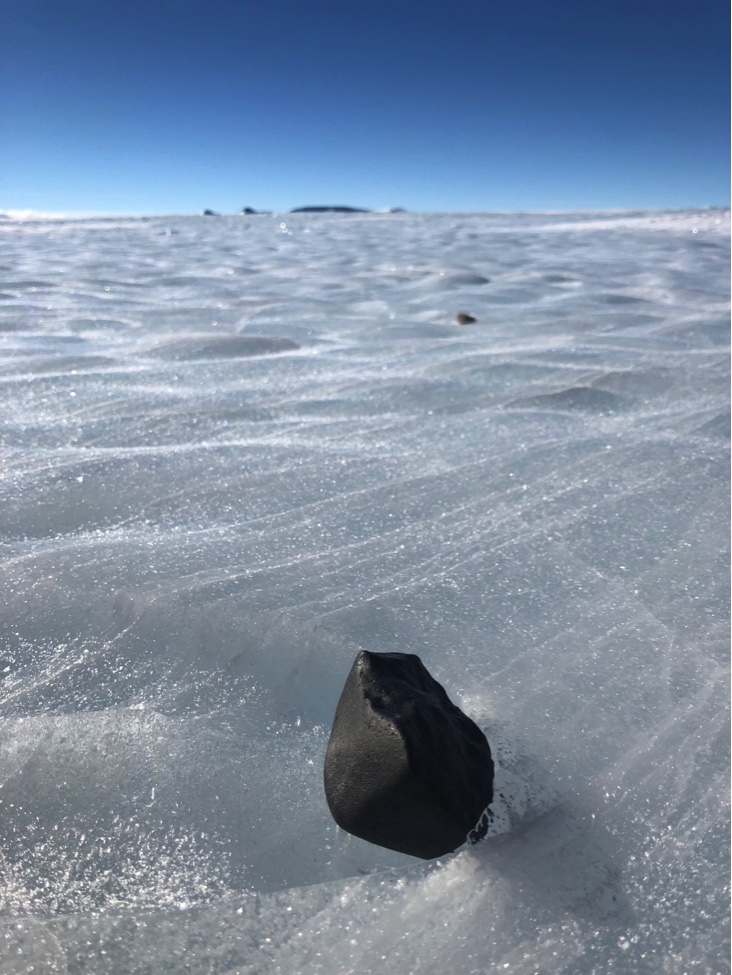 An Antarctic meteorite, just waiting to be collected!

It is weird to be back if I’m honest. Things are so different here and I’m having a bit of a rough time getting readjusted to be back in my old life. The first things I noticed is that my apartment feels gigantic. After living in a tiny tent for so long I’m not sure what to do with all this space that I have available here. Also the air here smells horrible and the water tastes terrible. The first things I bought coming back was a water filter. Being around of so many people is a bit strange and my body is trying hard to fight the jet-lag and regulate my body temperature. But I’m getting there and being around friends who are supportive helps a lot. And it is incredibly awesome to have access to liquid and hot water on demand, showers, indoor plumbing, but best of all is having access to fresh fruit and vegetable whenever I want! Antarctica really teaches you to live in the moment and to appreciate the little things in life. That is something I will never forget and cherish forever. 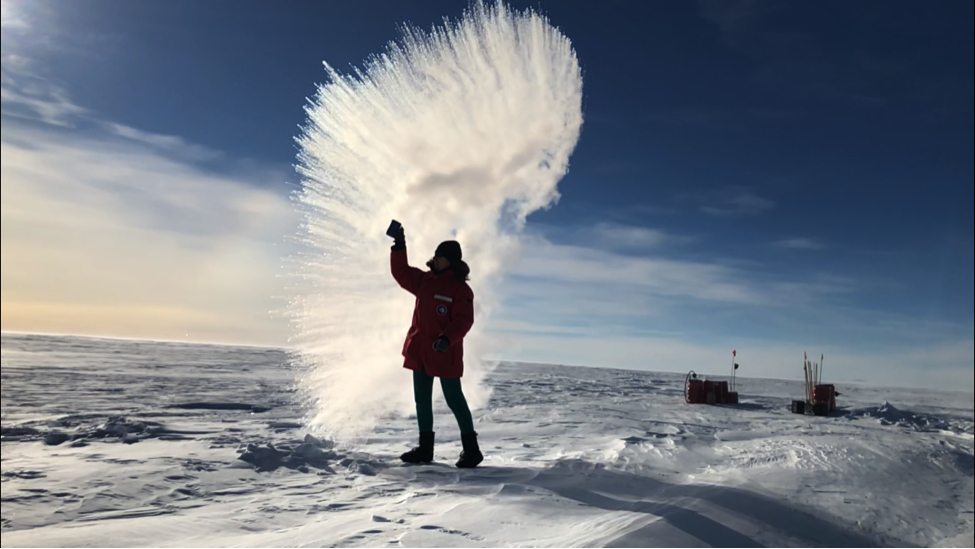 Dr. Gross tossing hot water into the air and watching it freeze instantaneously.