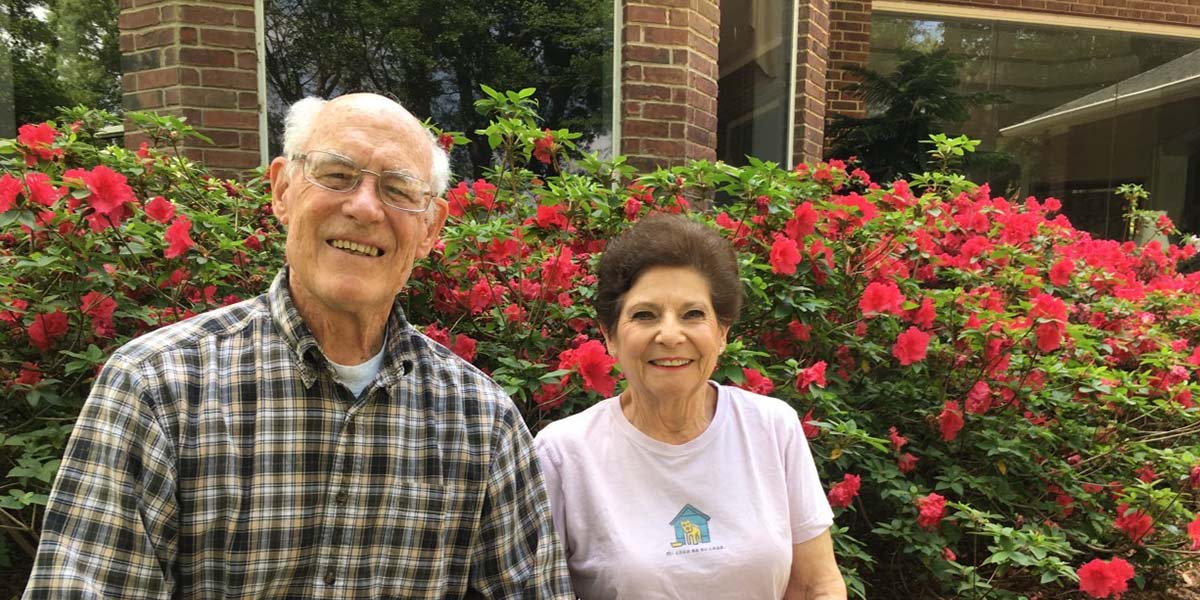 Bill Sparks was a kid growing up in New Jersey when he came across a magazine photo that showed two geologists doing fieldwork on a mountain in Turkey.

“I thought that looked like a lot of fun,” says Sparks, RC’65. “I could see myself doing something like that.”

Sparks majored in geology at Rutgers and went on to a decades-long career at Exxon, beginning as a petroleum geologist working on oil rigs and moving into executive roles that had him traveling to sites around the world. Retired since 1998, he and his wife Grace live in Texas within the Sam Houston National Forest region where they are tree farmers and fossil collectors.

“We are geologists right up till today,” Sparks said.

They are also steadfast Scarlet loyalists, with a special focus on Rutgers students studying geology. The Sparks are longtime supporters of the Department of Earth and Planetary Sciences in the School of Arts and Sciences, where the couple has established three scholarship funds that benefit undergraduate and graduate students.

“I have had a great life doing what I loved,” Sparks said. “My goal has been to help young people experience the same life that I had.”

This year four undergraduates pursued in-depth research projects with assistance from the Sparks Undergraduate Research Fund. The students are Emma Hinds, Anirudh Patel, Michael Pinnella, and Lakshman Prabhakar. Their research—which they presented during a recent poster session at the Wright-Reiman Laboratories—covers the full range of the field, from mapping dormant volcanoes to studying meteorites for clues to the earth’s composition. 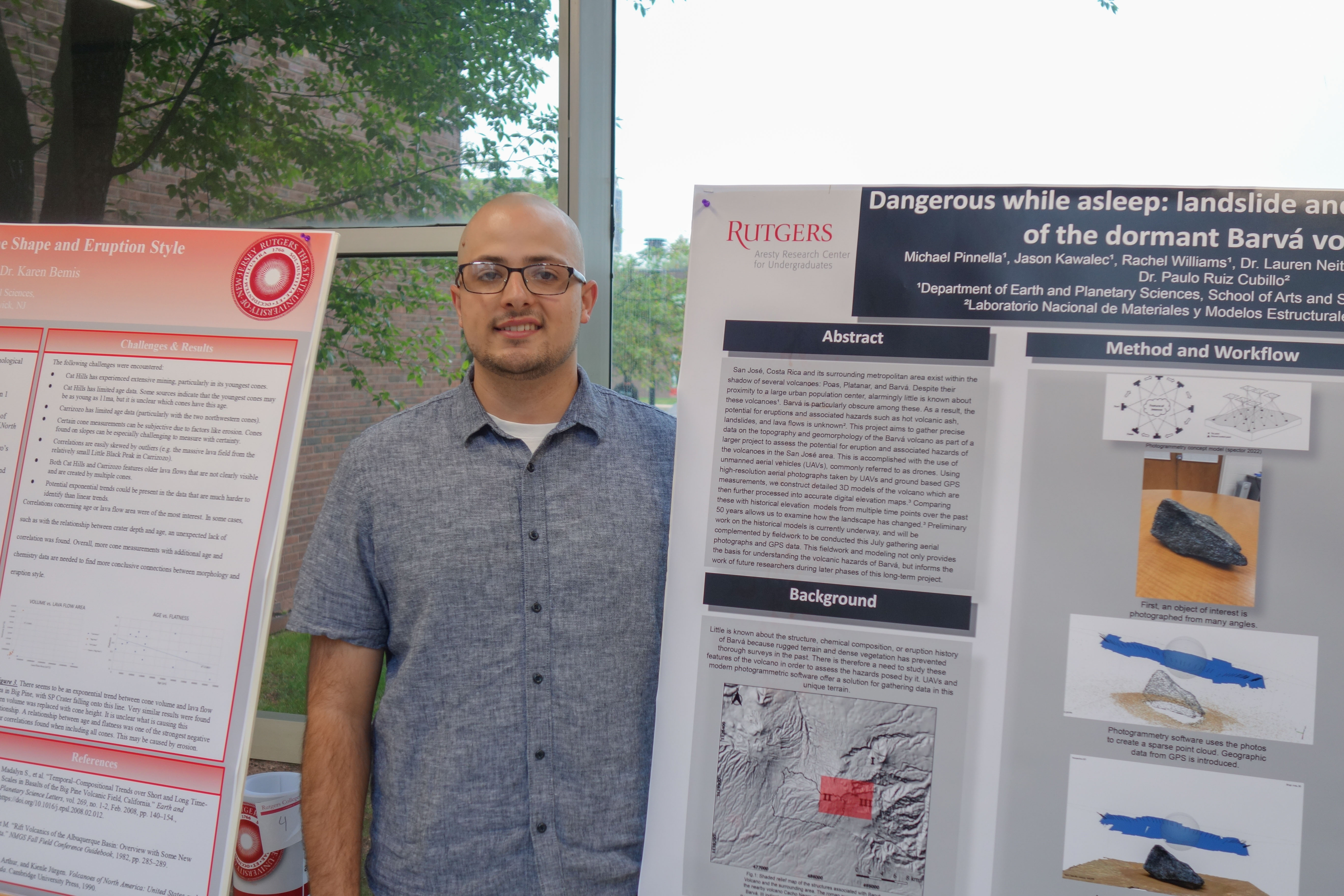 “The Sparks fund allows students to participate in research that they normally would not have the means to partake in,” says Lauren Neitzke Adamo, professor of earth and planetary sciences and director of the Rutgers Geology Museum. “Over the years these funds have allowed students to travel to other universities to conduct laboratory investigations, obtain data analysis that is often cost prohibitive, and travel to an array of locations to get their first taste of field work.”

Indeed, Pinnella will travel this summer to Costa Rica where he will use drones to create a 3D model and elevation map of the dormant Barva Volcano.

“Because the volcanos in this region are rugged and heavily vegetated, there really hasn’t been an assessment of the non-active volcanoes,” says Pinnella a geological sciences major.

Prabhakar’s research, meanwhile, will take him to sites around New Jersey and Connecticut to investigate the impact of cataclysmic 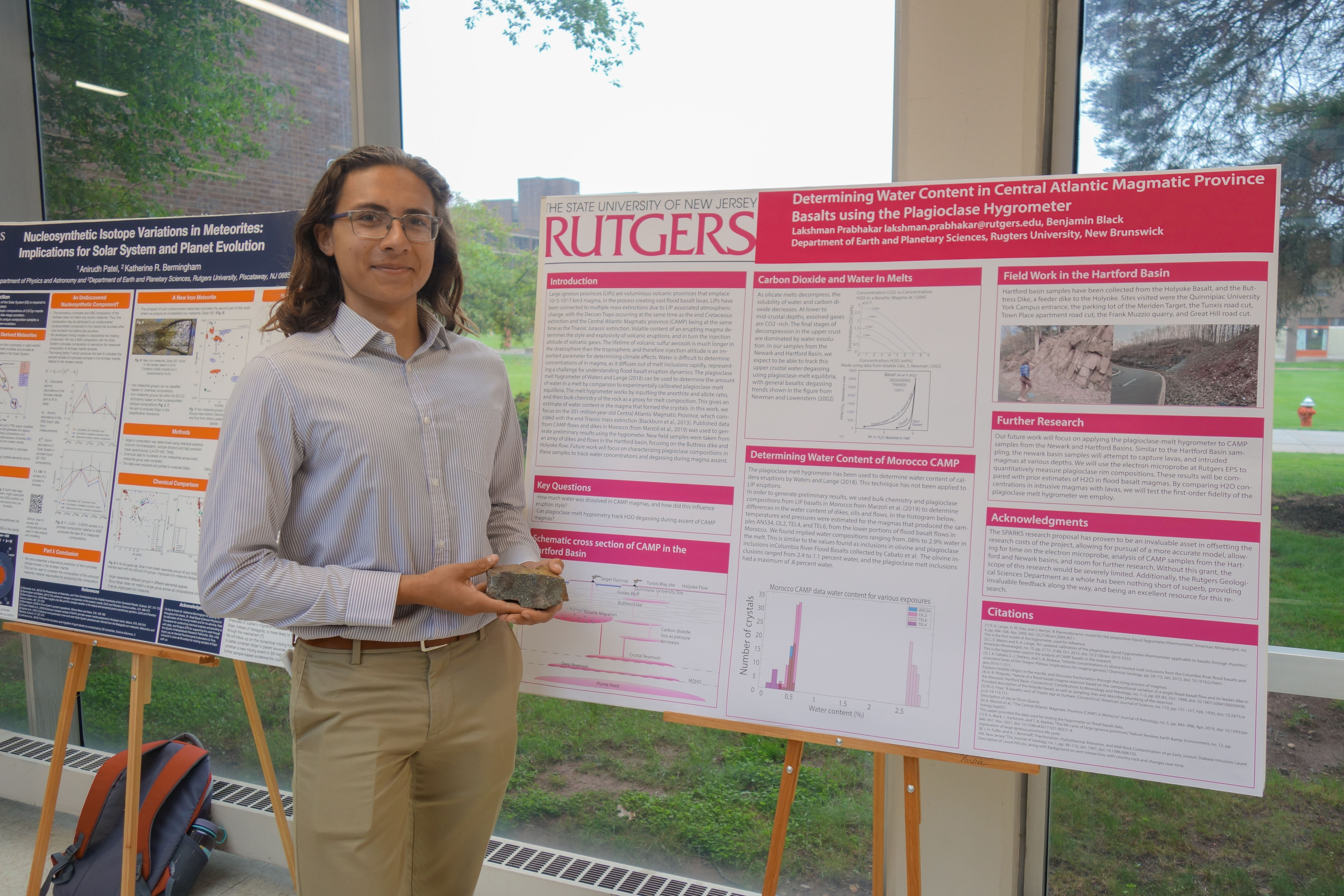 volcanic eruptions that occurred some 200 million years ago when the supercontinent Pangea was breaking apart.

“This was not an isolated incident,” says Prabhakar, a junior majoring in chemical engineering and geological sciences. “This has happened before on fairly long time scales, and it is associated with extinction, cataclysmic effects to the atmosphere, to life, and, obviously, to rocks.” 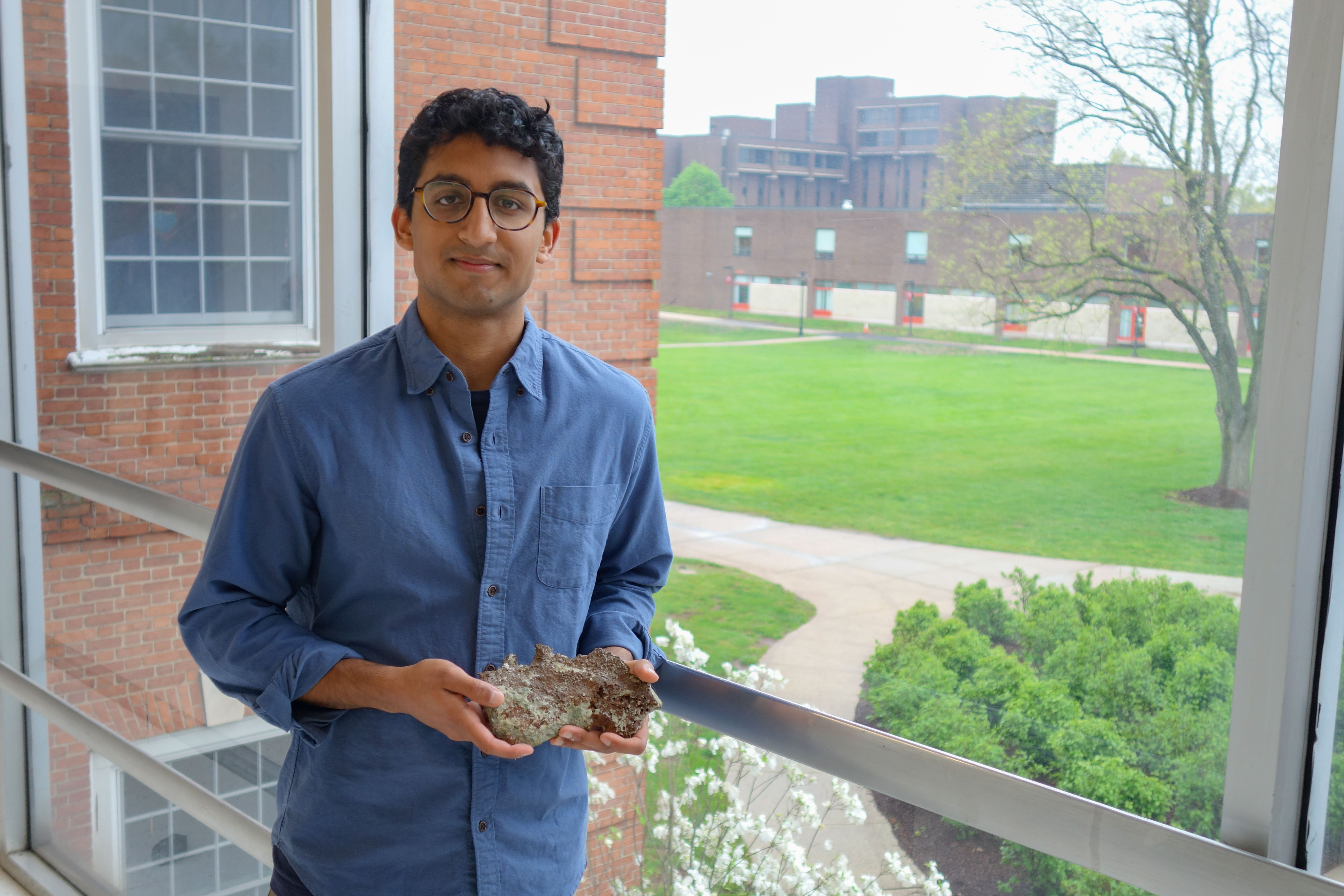 Patel, who will begin doctoral studies in astrophysics at Columbia University next fall, said the Sparks grant not only helps defray costs but also serves notice that undergraduate research matters.

“It validates that the work you are doing is meaningful, and that people are looking out and rooting for you,” says Patel, a physics and philosophy double major whose research involves study of meteorites. “It motivates, inspires, and pushes you, and as result you realize you are doing real work and real science, and that it is making an impact.” 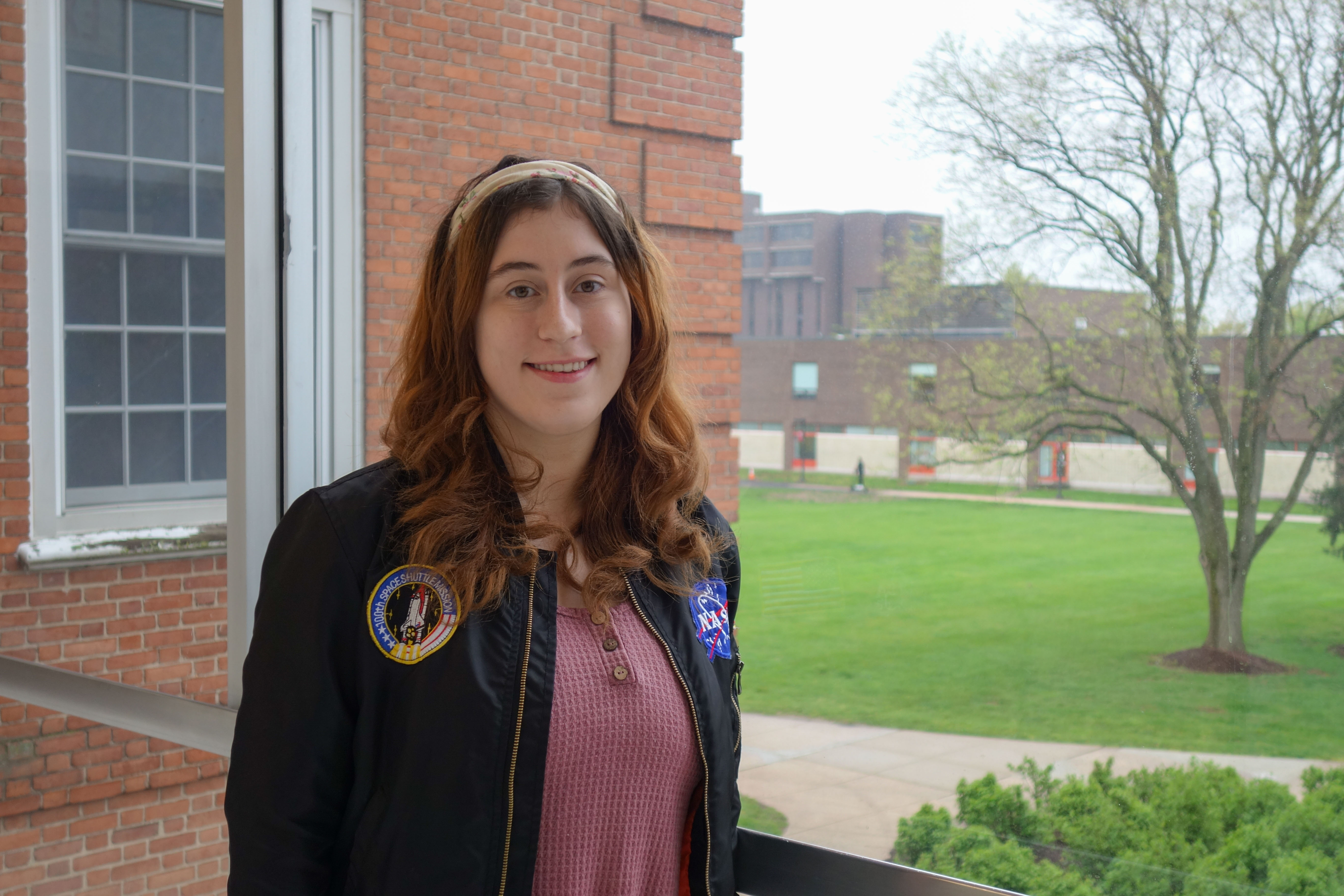 “I have always had an innate passion for environmental sciences and for geology as well,” says Hinds, a senior geological sciences major whose project involves studying how monsoon rainfall affects isotopic signatures in coral reefs off the coast of Bangladesh. “Receiving this support means quite a lot.”

Sparks, in an interview from his home, recalled growing up in Colonia, N.J. as an outdoorsy type who liked history and archeology read National Geographic, and was fascinated by rocks in his yard filled with fossils.

At Rutgers, he was particularly drawn to paleontology, which is the study of the history of life on Earth as based on fossils.

“It’s really about dates and working out what was going on hundreds of millions of years ago,” he said. “It was like being an investigator. It was intellectually stimulating, and involved a lot of outdoors time, so it all worked together.”

After getting his master’s degree in geology, Sparks joined Exxon as a junior geologist, working on oil rigs in South Texas and then becoming a production geologist where he evaluated oil and gas reserves. He later moved into senior leadership, including in international exploration and production. He served as president of Exxon’s production company in Indonesia and oversaw technical evaluation and contract negotiations across sites in Asia, Africa, and Latin America.

Although he missed being out in the field, he relished the opportunity to see the world and meet people from different cultures.

“I got to see the world, and that was a lot of fun,” he said. “It did take me away from the geology, but I enjoyed negotiating and dealing with people who were quite different, and understanding their points of view.”

“Overall, I feel amazingly lucky to have found a profession that fit my passion.”

*This article was first published on the Alumni section of the News & Events page on the Rutgers University, School of Arts and Sciences website.