Our research, teaching and outreach efforts are based out of the Department of Earth and Planetary Sciences, along with the Department of Anthropology.  The laboratory is located in the Biological Sciences Building on Douglass Campus in New Brunswick.  Support for our work comes from the National Science Foundation, International Continental Drilling Program, the Leakey Foundation, the Care Foundation, and the Center for Human Evolutionary Studies.

EarthRates Workshop  Cat Beck hosted a drilling workshop at Hamilton College, 20-22 April, 2018, to begin planning for the next coring campaign in the Turkana Basin.  Twelve scientists from around the world met to consider options including a long core from a floating platform on Lake Turkana, a single deep land-based core, or a transect of overlapping shorter cores.  All are intended to target the important Plio-Pleistocene stratigraphic window that has yielded the rich fossil and archaeological record of the basin. 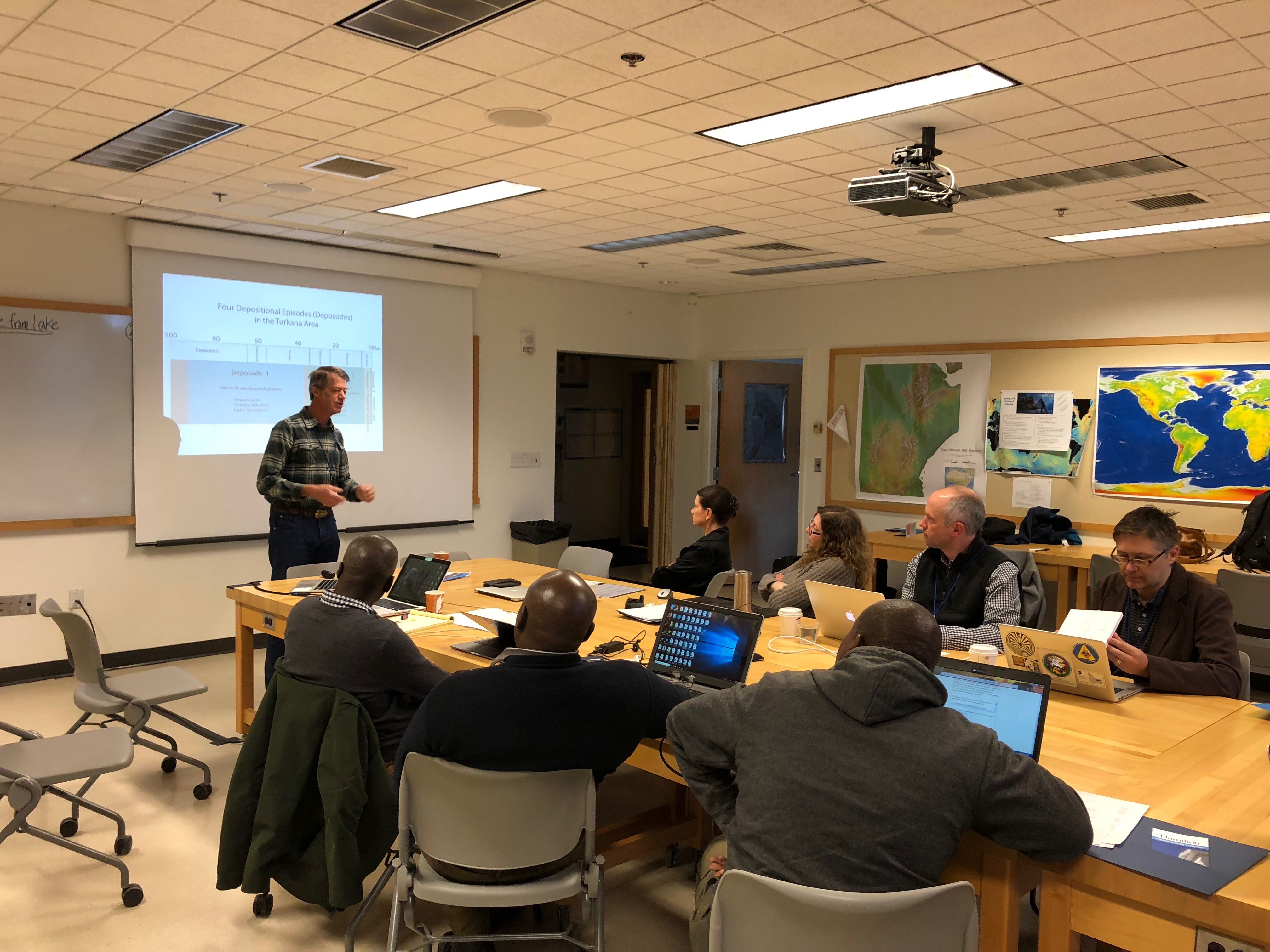 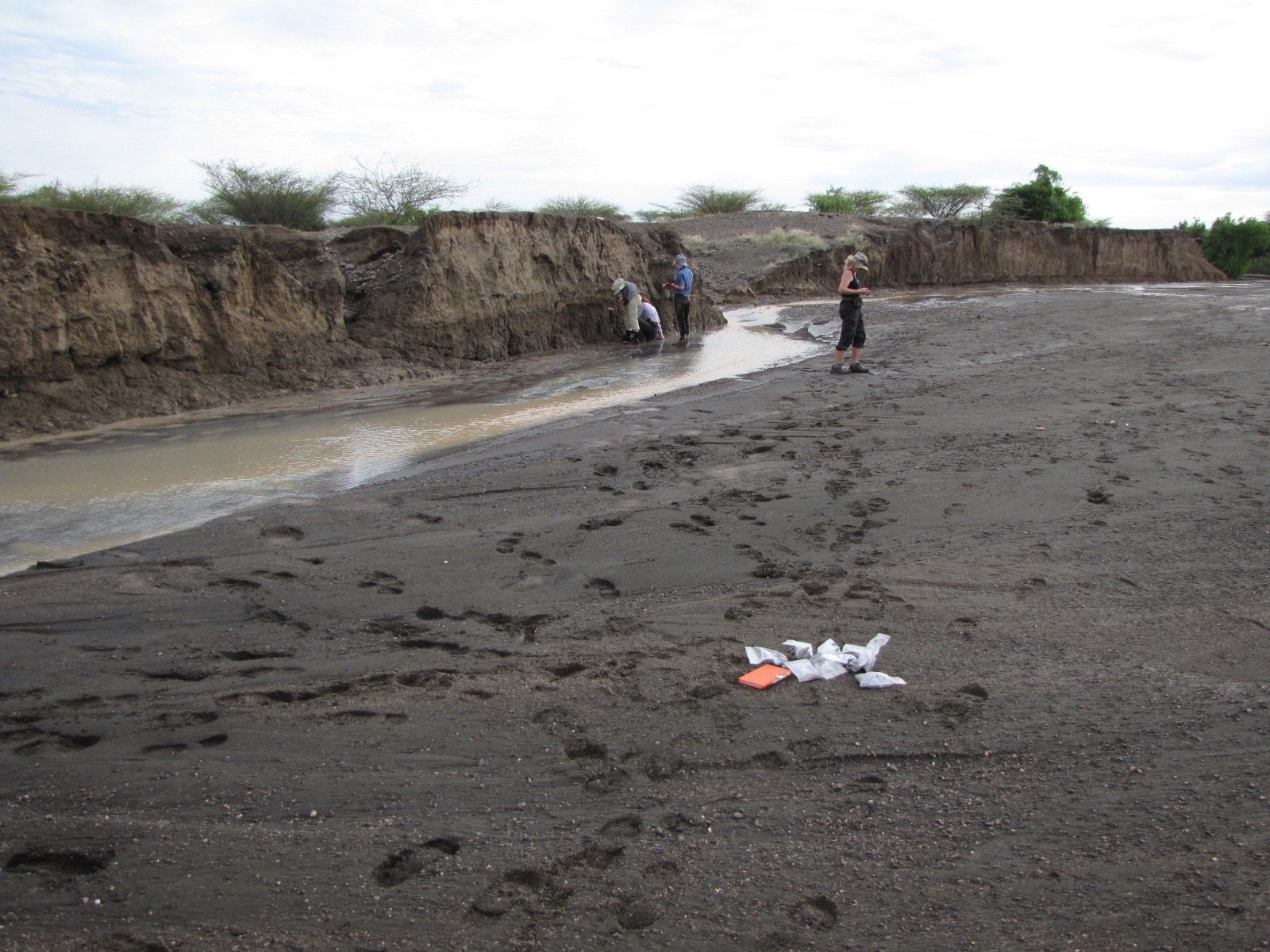 Sampling along the Kaitio laga after unseasonal El Nino rains.

Exploration on Central Island focused on a reconnaissanse of the crater lakes.  Flamingo Lake proved a fruitful coring site, while Crocodile Lake lived up to its name (and we kept our distance), and an arduous trek to Tilapia Lake found it considerably reduced in size. 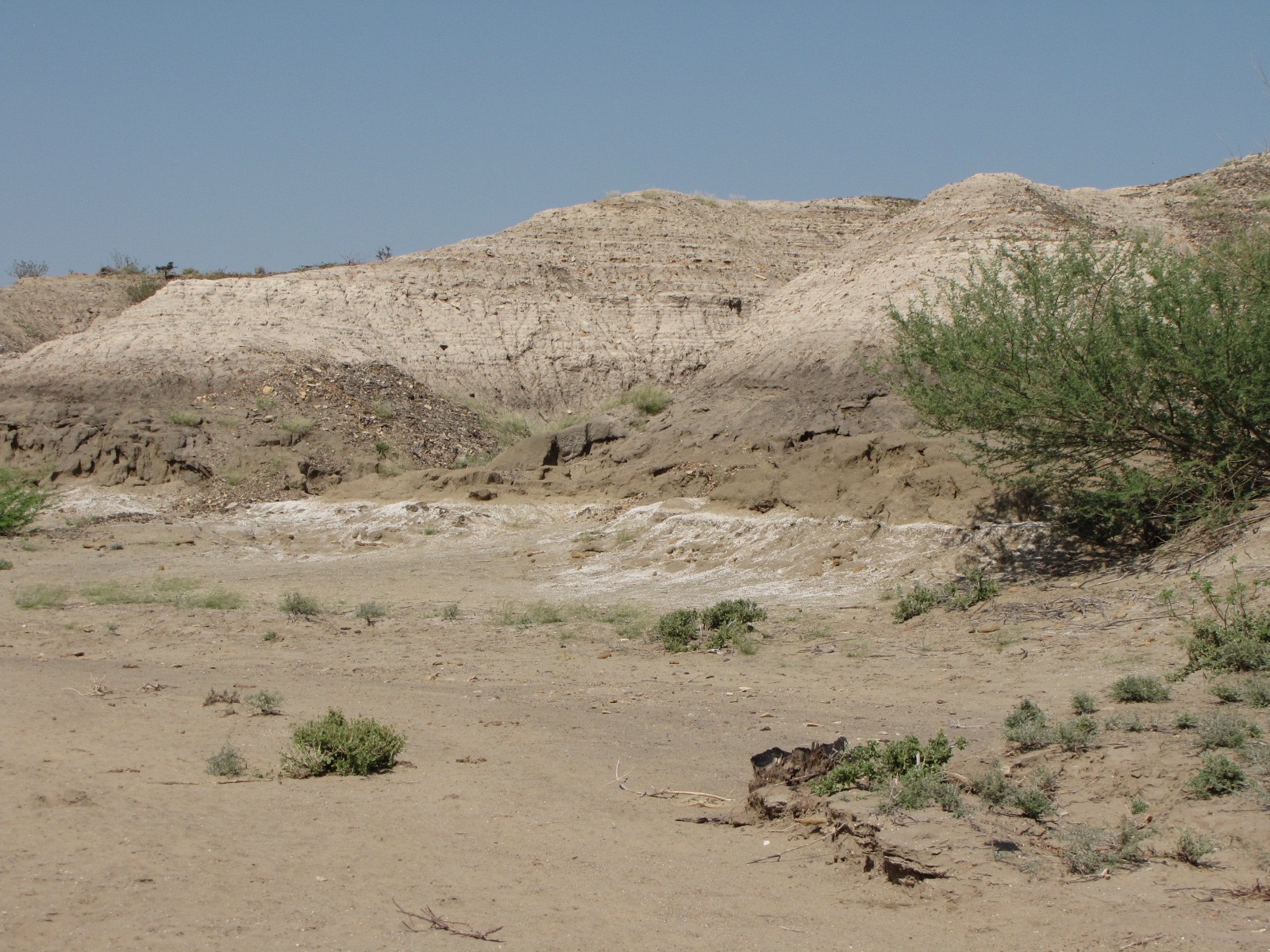 Exposures of the Galana Boi Formation at Kabua.

The Miocene locality of Locherangan, last investigated by William Anyonge in the 1980s, proved to have a rich  record of lacustrine clays with extensive paleosol overprints. 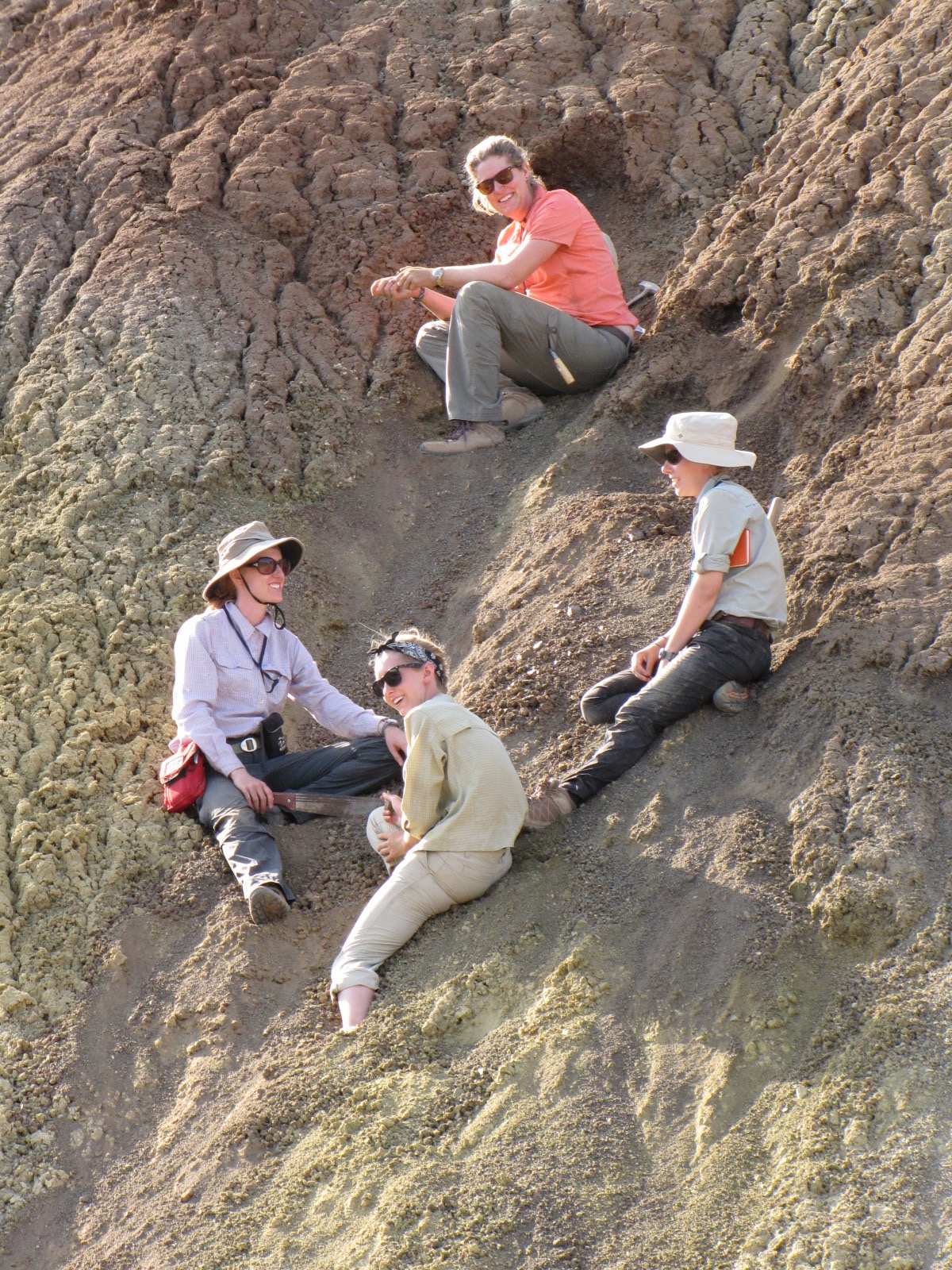 The steep exposures at Locherangan made sampling a challenge. From top Emily, Mary Margaret, Cat and Mary perched on the cliff.

GEO 303   The Geology Module of the Origins Field School at the Turkana Basin Institute moved to Ileret in February.  The two-week field course in northern Kenya trained students in geological field methods, mapping, and the geological history of the Turkana Basin.  Instructors included Craig Feibel and Linda Martin (Stony Brook), along with Bob Raynolds (Denver Museum of Natural History).  At Ileret, students explored the classic exposures of the Koobi Formation, and moderm shorline process along Lake Turkana.  The highlight of the session was our fly-camp near Koobi Fora spit. 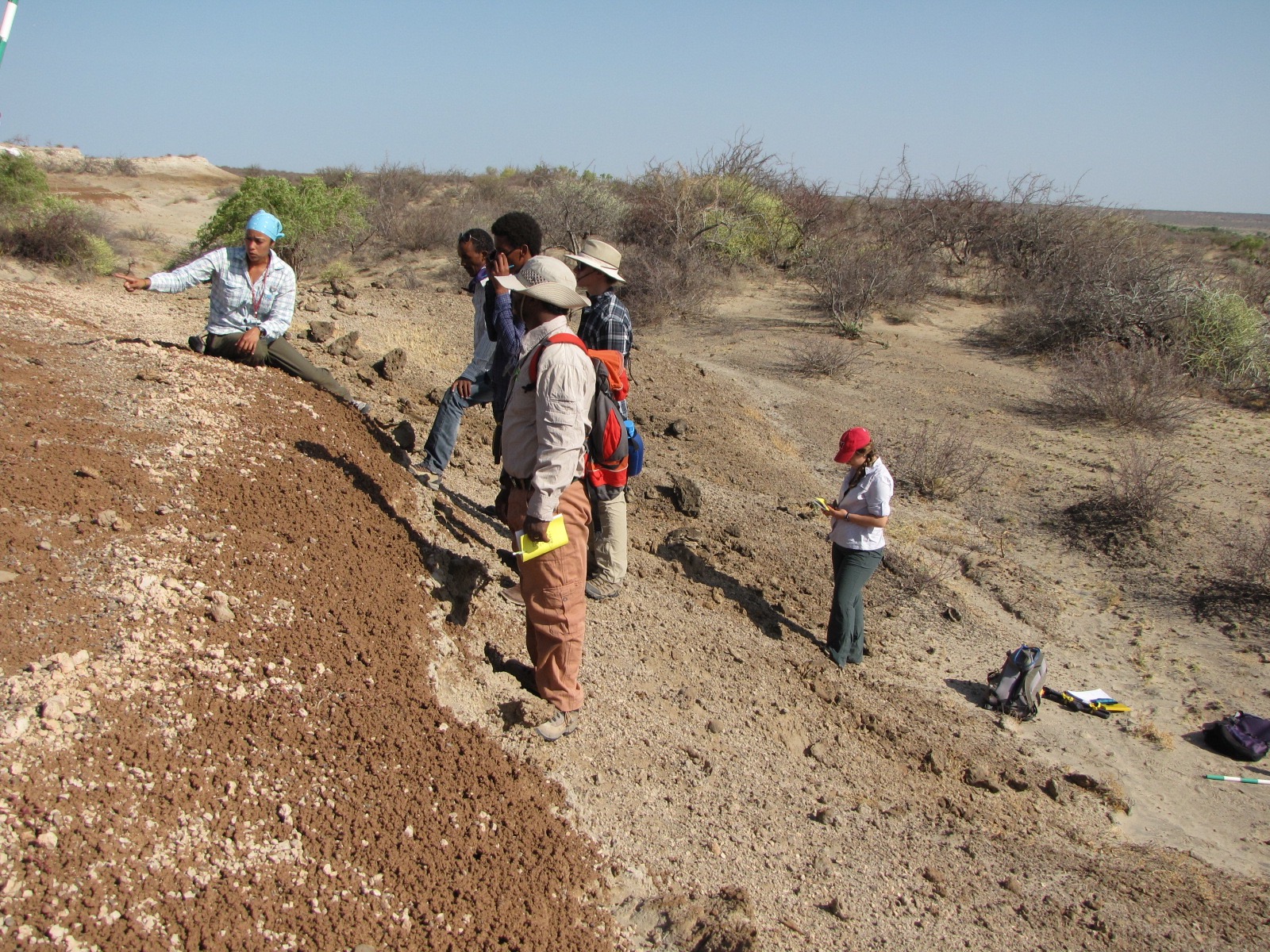 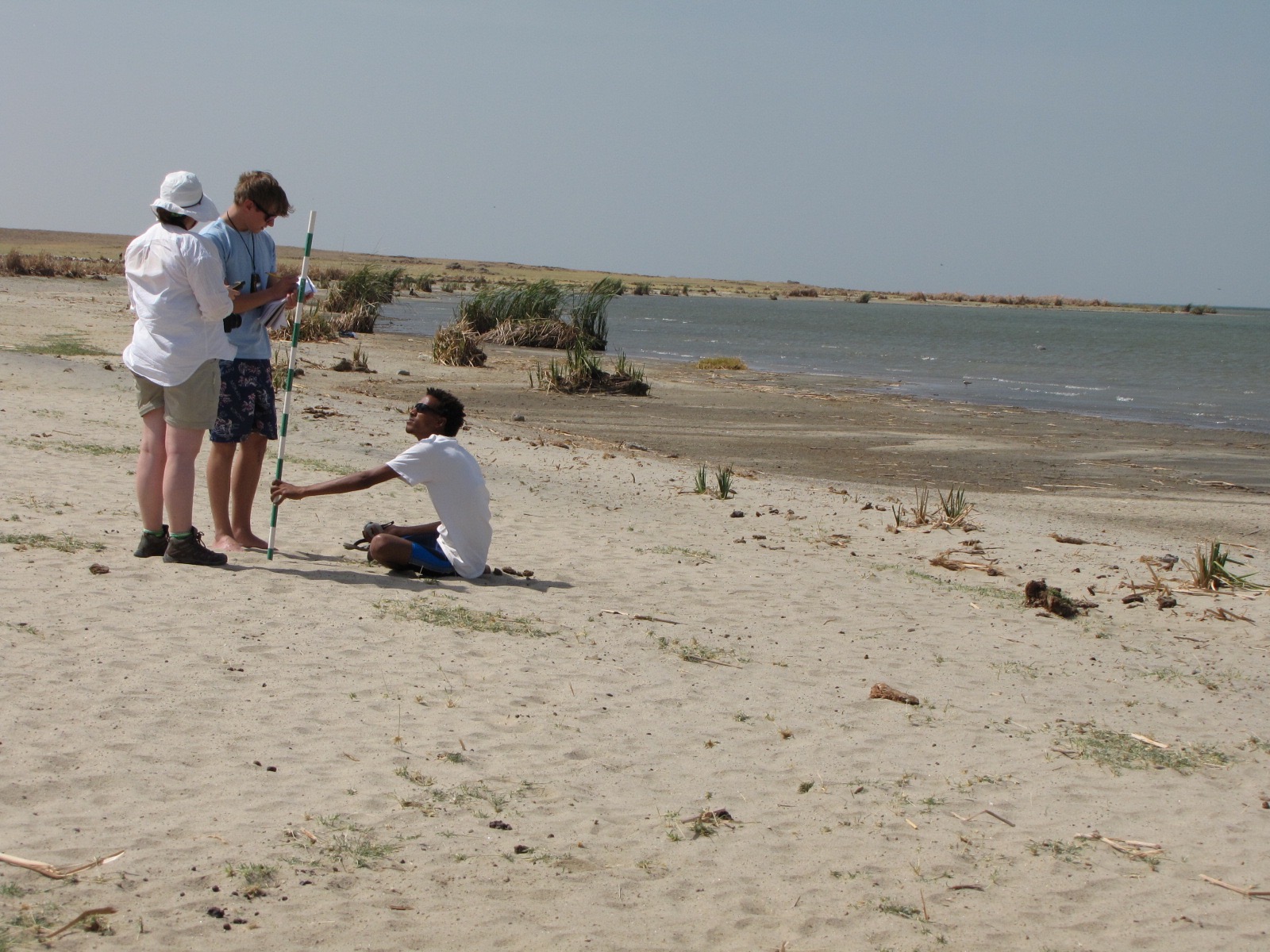 Students constructing a sholeline profile on the beach at Lake Turkana. 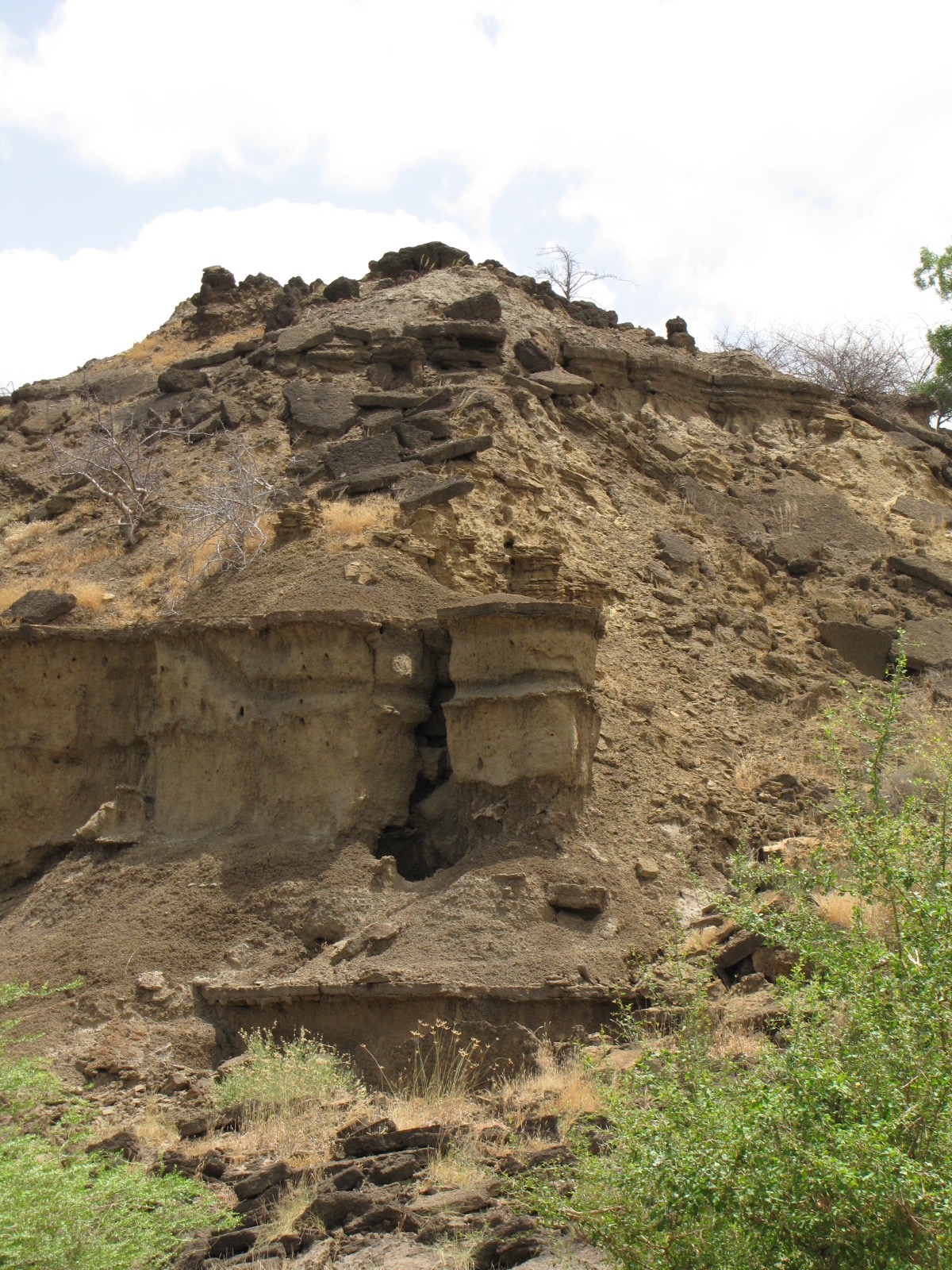 Lake margin strata of the KBS Member in Area 123 at Koobi Fora.

HSPDP2 The second annual meeting of the Hominin Sites and Paleolakes Drilling Project (HSPDP) was held in Atlanta, GA, in January 2016.  The research teams for all five 'legs' of the project (Afar, Turkana, Baringo, Magadi and Chew Bahir) met for two days to discuss progress and planning.  Again, the WTK13 coring and analysis team was well-represented. 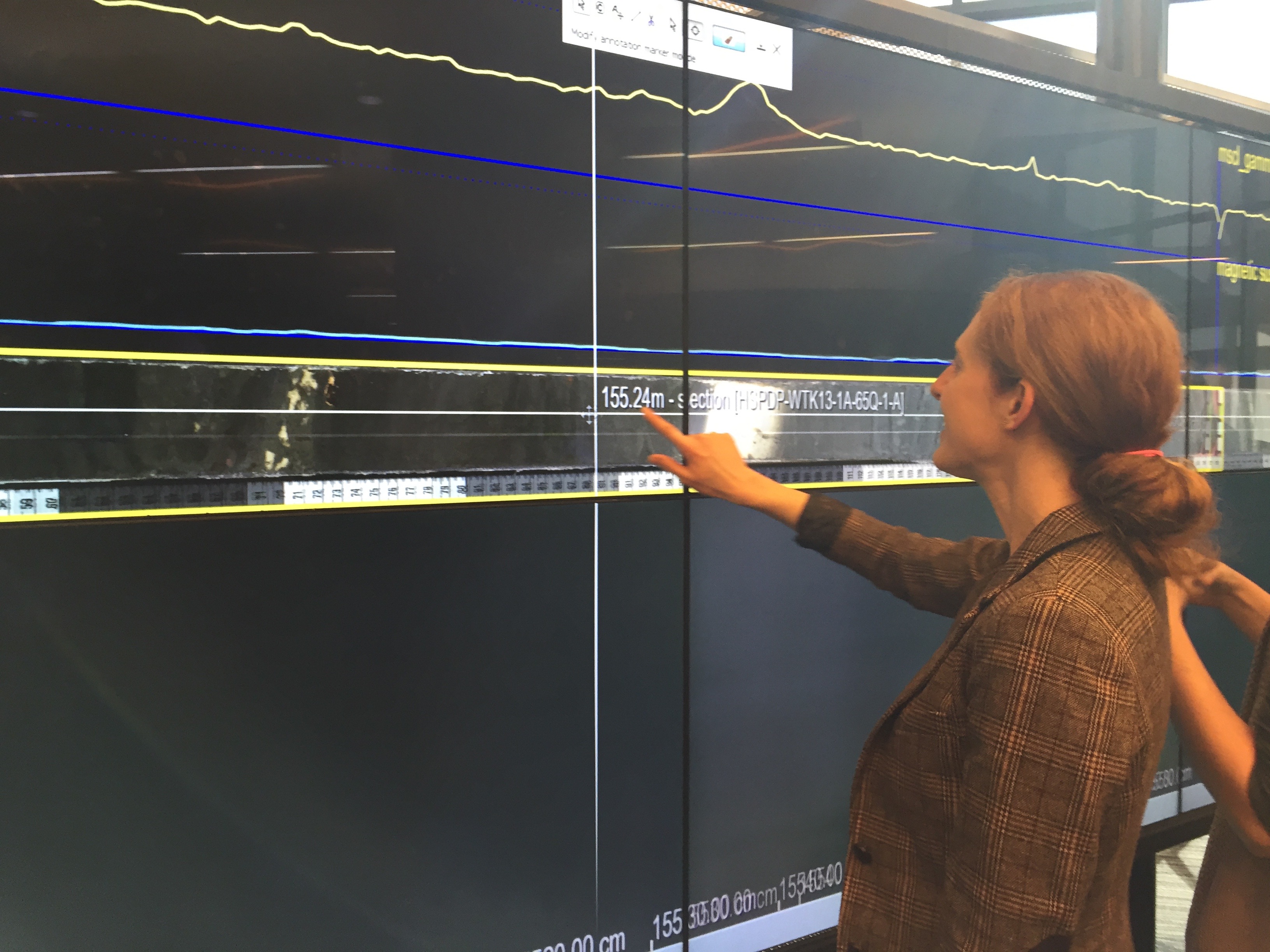 Cat Beck shows off the WTK13 core on the GSU Interact Wall.

Napudet 2015 A new collaboration with the Napudet Paleontological Project, directed by Isaiah Nengo, explored a complex terrane of Miocene and Pliocene strata exposed in the northern Napudet Hills. Though largely volcaniclastic in nature, the deposits preserve some exquisite fossils.  A basalt dated to 12.8 Ma by Ian McDougall and Frank Brown lies under the fossiliferous strata, suggesting a Middle Miocene age for the key localities. 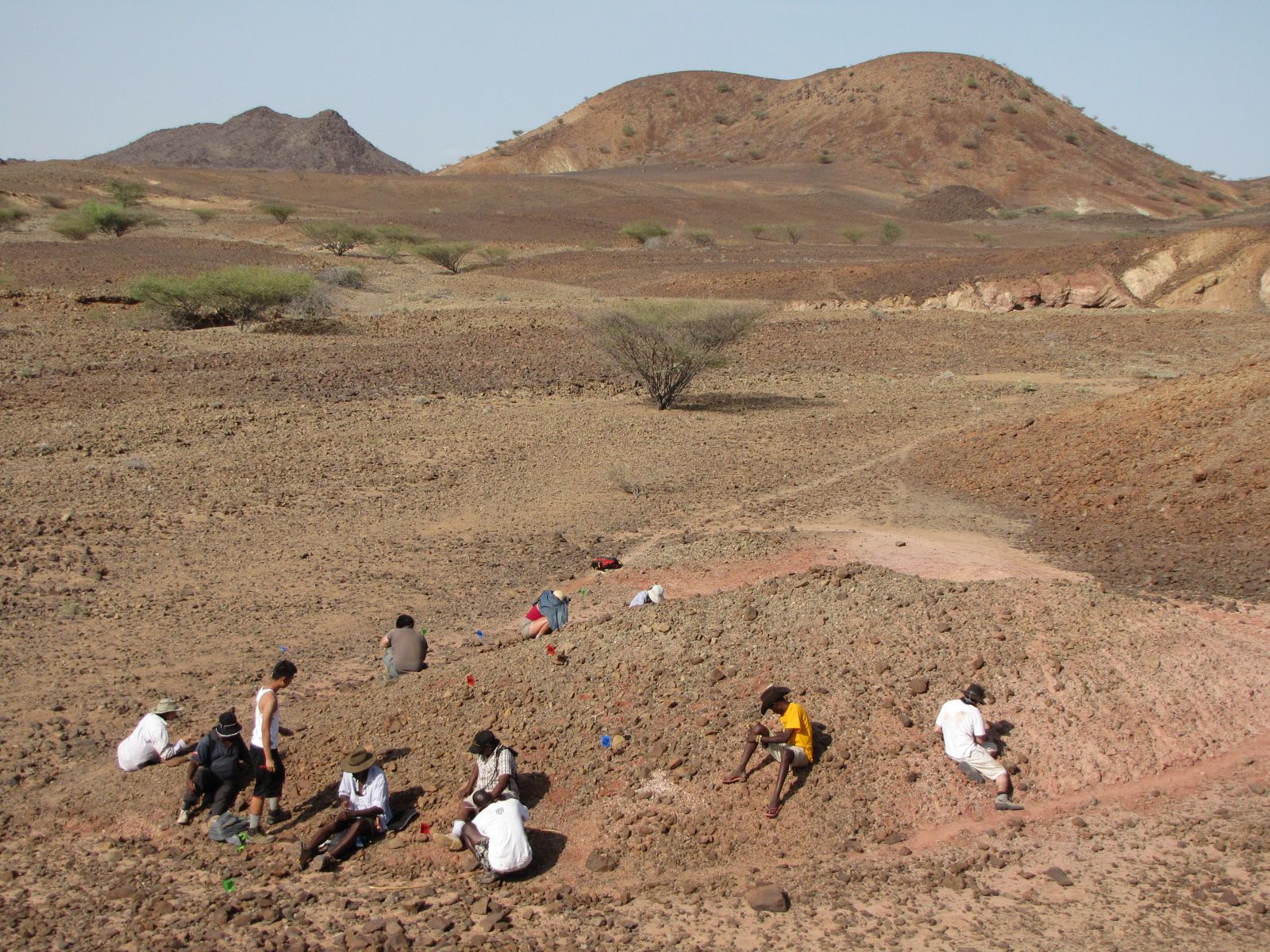 Prospecting for fossils on the 'Red Hill' at Napudet.

KBS Cyclostratigraphy A stratigraphic analysis of the exposures around the KBS site at Koobi Fora is included in the recent paper by Carol Ward and coworkers (link), describing the associated ilium and femur, KNM-ER 5881.  The geology not only constrains the age of these fossils to 1.9 Ma, but provides a detailed perspective on the cyclical nature of climate-controlled deposition at this time (read more).

GSA Vancouver 2014  The annual meeting of the Geological Society of America in Vancouver, BC, was the venue for a series of updates on progress of the WTK13 core project.  Cat Beck presented a synthesis of new results from our lab (pdf), while other talks and posters gave details of related investigations.

Kanapoi Fieldwork 2014  Working with the West Turkana Paleontology Project (WTPP), Craig Feibel and Melissa Boyd spent a month at Kanapoi investigating the sedimentary context of the fossil assemblages including much of the hypodigm of Australopithecus anamensis.  The work focused on detailing localities in riverine floodplain and delta settings, and circumstances of accumulation, burial and pereservation (read more).

Drilling success!  Our long-awaited drilling project in East Africa, the Hominin Sites and Paleolakes Drilling Project (HSPDP) collected over 200 m of core from West Turkana in June and July, 2013.  This effort targeted Early Pleistocene lake records of environmental change in close association with important paleoanthropological sites.  Our cores are archived at the National Lacustrine Core Repository (LacCore) in Minnesota.  Splitting and sampling began in mid-November 2013.  For updates visit the project website or join us on Facebook.